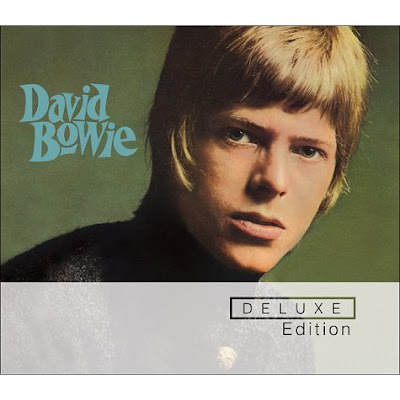 David Bowie's 1967 debut album for Decca finally receives the Deluxe Edition treatment. Disc One features the original stereo and mono mixes of the album stunningly remastered by Peter Mew and Tris Penna at Abbey Road Studios . This is the first time that the mono mix has been available in any format since the late '60s and is obviously the first time on CD. Disc Two features the singles, unreleased stereo mixes, the legendary unreleased single "London Bye Ta-Ta" and 5 Previously Unreleased tracks recorded for John Peel's Top Gear programme in 1967. All in all, there are a total of 53 tracks over the two CDs with 26 appearing on CD for the very first time! Sleeve notes by Tris Penna and Kevin Cann.

Audio CD (April 6, 2010)
Original Release Date: April 6, 2010
Format: Deluxe Edition
Label: Decca
ASIN: B002W1GCX4
David Bowie’s debut is the last of his albums to receive a deluxe reissue, perhaps because it would seem to be the last anybody would want expanded to a double-disc set. Roundly dismissed as theatrical twaddle in the vein of Anthony Newley, the 1967 album has its share of period charm, caught somewhere between the psychedelic swing and stuffy West End musicals — not quite the formula for major pop hits in 1967, nor is it necessarily an indication of what Bowie would later do, but it’s a fascinating, highly enjoyable debut, particularly in this generous 53-track, double-disc deluxe edition. The first disc contains the original stereo and mono mixes of David Bowie — the latter not easily available in decades, offering mixes that are sometimes quite different — while the second collects all the alternates and ephemera of the era: non-LP singles and single versions, sometimes drastically different, of album tracks, unreleased stereo mixes and alternate takes along with Bowie’s first-ever BBC session, also dating from 1967. If the album proper does sometimes seem a little constrained, too successfully appealing to the middlebrow, the music on the second disc is wildly lively and often much hipper: it has Bowie’s cheerfully silly “The Laughing Gnome,” which spins Syd Barrett whimsy further toward children, and it has his first great songs, the hazy swirling “In the Heat of the Morning” and fizzy “London Bye Ta-Ta,” it has the snappier single version of “Love You Till Tuesday,” along with that excellent first BBC session, which is muscular in a way the studio sessions aren’t. Then again, those highly produced original sessions — featuring such British studio stalwarts as Big Jim Sullivan and sometimes engineered by Gus Dudgeon or produced by Tony Visconti — are quite appealing, exemplary examples of the studio sound of London in the ‘60s. And in a way, having so much of these formative recordings in one place winds up enhancing the stature of David Bowie’s debut rather than diminishing it: sure, he’s gangly and awkward, too indebted to his peers, creating music too stuffy for the kids and too odd for adults, but it’s possible to hear the first real flowering of his talent here.

.No matter how many substandard albums David Bowie has released in the latter part of his career, his eponymous 1967 debut album has always been perceived as the slightest long-player in his catalogue. For some, then, this deluxe version of David Bowie – expanded to two CDs, with lengthy booklet notes – will be almost laughably inappropriate.

As well as legendary lost song London Bye Ta-Ta and contemporaneous non-album Bowie material like the swirling Let Me Sleep Beside You and novelty song The Laughing Gnome, disc two virtually gives us the album we’ve heard twice over (stereo and – first time on CD – mono) on disc one in a different permutation: single and radio session versions and previously unreleased mixes. All very comprehensive, but aesthetically too much even if the parent album was the greatest ever made.

David Bowie shows talent, but one very much unrefined. Within a musical style that is baroque pop crossed with northern brass band crossed with music hall, parping horns and brisk drums decorate pretty but largely unmemorable melodies. The lyrics are above average – thoughtful character studies – but hardly deep, sort of toytown Eleanor Rigbys. Highlights are the orchestrated, melancholy Sell Me a Coat, Rubber Band – an old-time musician's misty memories set to a marching beat – and There Is a Happy Land, a shimmering musical adaptation of Keith Waterhouse’s novel of childhood. Everything is agreeable but nothing truly classic and the relentless whimsy gets tiresome.
What is extraordinary throughout, though, is a vision and individualism remarkable for a 20-year-old. Young Bowie has a penchant for putting himself in the heads of the old and the unhip, something very unfashionable in the insurrectionist 60s. Meanwhile, he is so determined to stick to his then-daring resolution to sing in his own English accent that in the bopping Love You Til Tuesday he spurns the opportunity to rhyme “branch” and “romance” that an American inflection would offer him. As for the closer Please Mr Gravedigger, its sneeze-punctuated vocal and lightning-and-footsteps backing make it as much radio play as song.

David Bowie is hardly an essential listen but historically interesting as unmistakably the entrée of someone with a future. This chance of reacquaintance enables us to acknowledge that it deserves a marginally higher place in the pecking order. Let’s see… Let’s Dance – move aside.