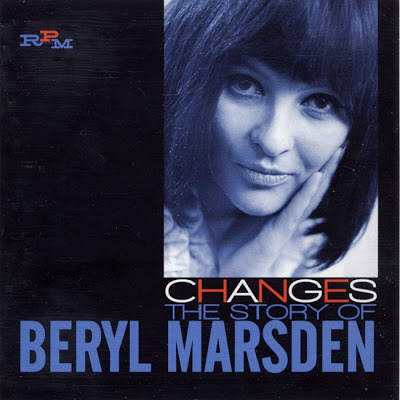 Beryl Marsden is one of those names that diligent British Invasion scholars are likely to be aware of, but unlikely to actually have heard much or at all. She has footnotes in some history books as being one of the most popular woman vocalists in Liverpool in the early to mid-'60s, as well as for singing on a 1966 single by the early quasi-supergroup the Shotgun Express (who also included Rod Stewart and Peter Green). This has all dozen of the tracks she issued on Decca and Columbia from 1963-1966, as well as, less interestingly, three 1979-1981 recordings, and eight done just a few years prior to this 2012 compilation. It's one of those anthologies that doesn't really live up to the reputation of the artist, frankly, as Marsden was an OK singer, but not superb. Her '60s singles (there's also a live track from the At the Cavern LP) had serviceable covers of American soul and girl group-type songs that didn't match the originals, as well as some more Merseybeat-influenced pop tunes (including "Love Is Going to Happen to Me," co-written by a young Lesley Duncan with her brother). The orchestrated pop of the Shotgun Express single "I Could Feel the Whole World Turn Around," though not typical of her style, is actually the best song (a previously unreleased alternate take of the subsequent Shotgun Express track "Funny 'Cos Neither Could I" including her voice is also here, though the issued 45 did not include her vocals). The recordings of a more modern vintage are way too synth pop-heavy (even on the '60s soul/girl group covers) to be of much if any interest to those who are curious about her British Invasion-era recordings, though her voice remained in good shape. The compilation's for a specialized audience even by British Invasion collector standards, but the packaging's excellent, the lengthy liner notes including many recollections by Marsden herself.