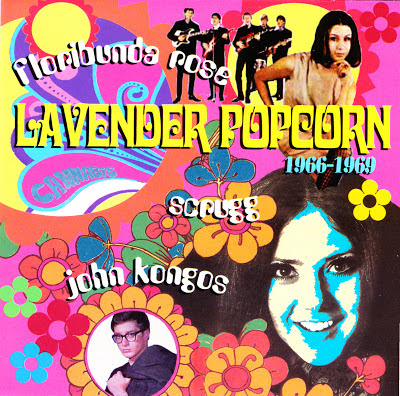 Having had success in South Africa in the early 1960s with his band Johnny and the G-Men, as well as a solo artist, Kongos went to UK to pursue his musical career. His first UK based group, Floribunda Rose, formed in April 1967, comprised the British musicians :
Pete Clifford (guitar) (born Peter William Frederick Clifford, 10 May 1943, Whetstone, North London) and Jack Russell (bass, vocals) (born 29 April 1944, Caerleon, South Wales), who had come to South Africa in June 1965 with The 004; drummer Nick 'Doc' Dokter (born 24 July 1945, Kampen, Overijssel, Holland), a latter day member of 004; and the Cyprus born keyboard player Chris Demetriou from John E Sharpe and the Squires. After one single, "Linda Loves Linda", Clifford returned to South Africa to join The Bats and Dokter moved to Canada and worked with Five Man Cargo. Drummer Henry Spinetti joined and the remaining members recorded three singles as Scrugg.
After 18 months of gigging in Britain and Europe with his bands Floribunda Rose and Scrugg, and five singles later, he released his first solo album, Confusions About a Goldfish (1970), on the Dawn record label.
He then concentrated on songwriting, and began to have major success in Germany and other European countries (No 1 and Top 10 hits). He then moved to Fly Records with whom he had two hit singles – "He's Gonna Step On You Again" (UK No. 4, May 1971;[1] U.S. Billboard Hot 100 No. 70) and "Tokoloshe Man" (UK No. 4, November 1971).[1] His second album Kongos made the Top 30 of the UK Albums Chart, but subsequent singles, "Great White Lady" (1972), "Ride the Lightning" (1975) and "Higher than God's Hat" (1975), did not chart.[1] "Tomorrow I'll Go", which appeared on Kongos, was covered by New Zealand band The Human Instinct on their 1970 album Stoned Guitar, while "Ride The Lightning" (1975) was covered by Sylvie Vartan as "Qu'est-ce qui fait pleurer les blondes?" in France and was Number 1 on that chart for several weeks in 1976.
"He's Gonna Step On You Again" is cited in the Guinness Book of Records as being the first song to ever use a sample.
Kongos continued to work in his own London studio as a record producer, sound engineer, TV jingle and theme music composer, and songwriter, as well as handling the programming of the Fairlight CMI synthesizer on Def Leppard's 1983 album, Pyromania.
He gained notoriety with a new musical generation in 1990, when Madchester pioneers Happy Mondays reworked "He's Gonna Step On You Again" into their baggy era defining hit "Step On", which reached number 5 in the UK Singles Chart.[2] In the same year they also covered his "Tokoloshe Man", for the compilation album, Rubáiyát.
His 1966-1969 work (including his recordings with Floribunda Rose and Scrugg, and his solo album Confusions About a Goldfish) was released on a compilation album, Lavender Popcorn (2001).
John Kongos Featuring Floribunda Rose & Scrugg ‎– Lavender Popcorn
Label: Castle Music ‎– CMRCD 395
Perhaps kicked into action due to the inclusion of Scrugg's "I Wish I Was Five" on Rhino's second Nuggets box from the year prior, the Castle label issued Lavender Popcorn: 1966-1969, which digs deep into the discography of eccentric psych-pop musician John Kongos. Prior to the period documented here, Kongos had several records under his belt as a South African artist, which were popular there but failed to translate elsewhere. Upon his 1966 relocation to England, he headed the short-lived bands Floribunda Rose (one single) and Scrugg (three singles) and then went solo. This anthology ties up everything from Floribunda Rose   and   Scrugg , while adding some unreleased material. Kongos' first solo album, 1969's Confusions About a Goldfish, is also included in its entirety. Though it doesn't include significant later singles like "Tokoloshe Man" and "He's Gonna Step on You Again," the disc is rather essential for psych-pop completists. 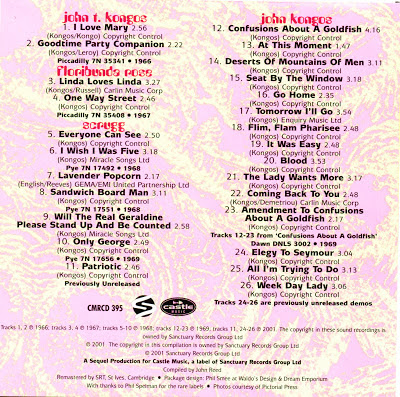