Kenny And The Kasuals -Things Getting Better & Nothing Better to do 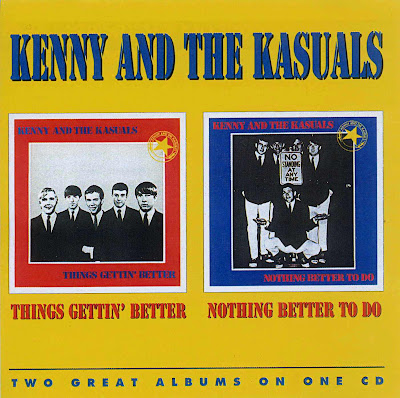 This Dallas group -- too accomplished to be called a garage band in the usual sense of the term -- was pretty popular in their hometown in the mid-'60s, but never made any noise on the national level. It's ironic that much of their reputation rests on a live album of covers, Impact, that ranks among the most collectable LPs of the '60s, as the group actually wrote a lot of their own material. Starting in the mid-'60s as a sort of raucous Dave Clark Five-meets-the Stones combo, the Kasuals progressed to acid punk with their most popular local hit, "Journey to Tyme" (which would become one of the most valued singles by '60s garage collectors). They were a typical '60s group in that they also cut covers of popular R&B and British Invasion tunes, and sappy pop ballads that were most likely encouraged by the shortsighted local label owners for whom they recorded. The group tried their luck in New York City briefly and split in late 1967. A spin-off group (without leader Kenny Daniels) released a promising single with progressive and folk influences under the name Truth, and the group reunited very briefly before splitting again after several members were drafted. Their material was reissued in Europe in the '80s, along with a fair number of previously unreleased outtakes. 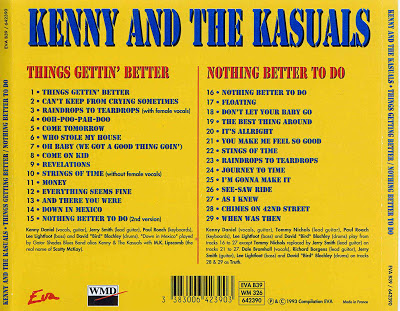 Back in the days before Sundazed Records and Norton Records had cornered the market in reissues of garage band recordings, Eva Records from France was a major player in the field. One of the highlights of their catalog that still hasn't been supplanted by a better version from someone else, Things Gettin' Better/Nothing Better to Do is a compilation of two Kenny & the Kasuals LPs on a single CD, in surprisingly decent sound -- with the major flaw that the two albums' tracks were reversed in order from what is listed on the tray card or the insert. Essentially, Kenny & the Kasuals were a highly talented Texas-based garage band; at times, they push the envelope of the latter category with their virtuosity, which extended to a considerable amount of songwriting on both of these albums. Jerry Smith's fuzztone guitar has a nice crunchy texture on "Journey to Time" and "Come Tomorrow," and Smith's and Kenny Daniels' guitars have a nice ringing texture that's right in your face on "Don't Let Your Baby Go." The group's material all has a defiant punk edge, sometimes with a comic edge, as on the brilliant "Who Stole My House," until they evolved into the decidedly spacier Truth, two of whose tracks are represented here, one the surreal, psychedelic "Chimes on 42nd Street," and the more languid, folk-like "When Was Then."
Posted by : D&J at Tuesday, February 12, 2013