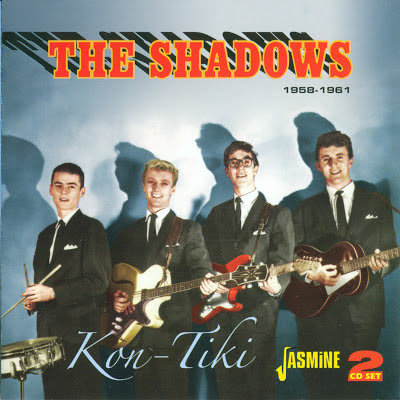 The Shadows are usually thought of as the quintessential British instrumental group and, along with the American band the Ventures and the Swedish group the Spotnicks, one of the most popular instrumental groups in the world. But that barely tells the story of their true significance in the history of British rock & roll -- including the fact that they were the first home-grown British rock & roll band to dominate the U.K. charts; or that they weren't originally an instrumental group, either. The band's roots go back to Chesthunt, Hertfordshire, in early 1958, when a young Indian-born singer/guitarist named Harry Webb joined with drummer Terry Smart and guitarist Norman Mitham to form a group that they ended up calling the Drifters -- at the time, none of the records by the American R&B group of the same name, founded by Clyde McPhatter, had been released in England, so they had no inkling of the name's already being used.
The group played their first performance in March of 1958 at a dinner dance and, after a few weeks of local performances, they debuted at the 2I's coffee bar in London's Soho. The 2I's was renowned as the venue where Tommy Steele had been discovered, and was occasionally visited by producers, recording engineers, and managers in search of new talent -- it had, thus, become something of a rock & roll Mecca. the Drifters weren't signed overnight, but they did become immensely popular, playing some very convincingly American-style rock & roll, at least by the standards of the time in London. Indeed, at their shows, audiences were usually packed in too closely to dance, and the ten pounds they made each week between them in the beginning was serious money for three amateur musicians. In the course of their 2I's gigs over the next few weeks, they picked up one fan, John Foster, who became their first manager, and another, Ian Samwell, who joined them as a guitarist -- interestingly, they had no bassist in their lineup and didn't for quite a while, which set them apart from other bands but didn't seem to impede their progress.
The first of two name changes came up when they got an outside booking in Derbyshire -- at that point, Foster decided that "the Drifters" wasn't impressive enough as a name by itself, and wanted their vocalist to have lead billing. At that point, as the singer observed 40 years later, "[Harry Webb] didn't sound very rock & roll." And so, after some pondering of the possibilities, he picked up a stage name, Cliff Richards, with Samwell recommending that the "s" be left off. And Cliff Richard & the Drifters were born. A little more than 40 years later, he was Sir Cliff Richard.
By that time, the group was a quintet of Richard (who still played guitar as well as singing, in the early days), Mitham, Samwell, Ken Pavey (on third guitar), and Terry Smart -- and still no bassist. This five-man group recorded a demo in June of 1958, of "Breathless" b/w "Lawdy Miss Clawdy," which found its way to Norrie Paramor, a producer at EMI who, after seeing them in an audition, signed Richard to the company's Columbia label. And in July of 1958 the group, augmented by session guitarist Ernie Shaw playing lead and Frank Clarke on bass, backed Richard on his debut single, "Schoolboy Crush" b/w "Move It," credited to "Cliff Richard & the Drifters." The A-side was a pleasant, loping slow-tempo piece of teen pop/rock worthy of Fabian at his wimpiest; but "Move It" -- authored by Ian Samwell, no less -- was a pounding, driving rocker in the best Elvis Presley manner. And fortunately for all concerned, the record was "flipped" and "Move It" became the A-side. The record, released in late August, reached number two on the charts, and as it was climbing the listings, Cliff Richard began a series of appearances on the television show Oh Boy! in mid-September. All of these events -- the recording contract, the single, the chart placement -- ensured Richard's emergence to stardom, but the Drifters, at first, were another matter. Although he was willing to use the group on Richard's recordings, Paramor already felt compelled to use session musicians to enhance their sound in the studio; and as their audience grew along with the demand for shows in bigger and more competitive venues, it was clear that the group would have to adapt.
It was John Foster who, in the summer of 1958, went to the 2I's in search of a Liverpool guitarist-and-singer he'd heard about named Tony Sheridan -- he wasn't there, but Foster did find a pair of virtuoso guitarists named Hank Marvin and Bruce Welch; they were already members of a top skiffle group called the Chesternuts, and had made a couple of records. By September of 1958, Mitham and Pavey were gone from the group, replaced by Marvin and Welch. With a lineup of Richard, Marvin, Welch, Samwell, and Smart, they proceeded to play before crowds that were completely unprecedented for a home-grown British rock & roll band. Richard also abandoned his guitar, just as Elvis Presley had, and found the experience liberating, as his stage moves became all the more intense and downright provocative, so much so that they were regarded as highly controversial in the press. And the shows filled up and the bookings and the fees skyrocketed -- their sound was still a bit raw on-stage, but even that worked to their advantage at the time, giving the music still more authenticity than was typical for the time in England.

After a short transition period, however, the band found their popularity just as great as ever, and a string of hits followed across 1962 and beyond: "The Savage," "Guitar Tango," "Dance On," "Foot Tapper," "Atlantis," "Shindig," and "Geronimo." All of those made the Top Ten, with four placing at number one, through the end of 1963, carrying their success into the midst of the rise of the Beatles and the Liverpool sound. The group's first two LPs, The Shadows (1961) and Out of the Shadows (1962), both topped the album charts as well, and their next three long-players, Greatest Hits (1963), Dance with the Shadows (1964), and Shadow Music, all made the Top Five (the first two at number two). They also continued to appear on stage with Cliff Richard and played on most of his biggest hit records of the period. Locking was gone by 1964, replaced by John Rostill, inaugurating the longest-lasting lineup in the group's history, Marvin, Welch, Rostill, and Bennett comprising The Shadows from 1964 until 1973, when Rostill's death eliminated the permanent bassist's spot. From then on, The Shadows would emulate Roxy Music by employing bassists rather than taking them on as ongoing members. Their success was the envy of a lot of musicians, though they were never able to successfully crack the American market as anything more than a cult act -- indeed, on that side of the Atlantic, they tended to be thought of in the same vein as the Ventures, who came along at roughly the same time in the late '50s and have endured at least as long.
The Shadows -- often referred to informally as "the Shads" by their fans -- officially disbanded in 1968, on the tenth anniversary of their signing to EMI. Bennett devoted himself to a second career as a producer and arranger, while Marvin and Welch formed a Crosby, Stills & Nash-type trio with John Farrar in the '70s, with harmony vocals to match. But in spite of some gorgeous recordings, they were never able to leave The Shadows legacy behind, and by 1973, the group had been officially reactivated with Farrar as a member. The group remained active throughout the '70s and '80s, switching to the Polydor label with the start of the latter decade and still selling large numbers of records and CDs, as well as concert tickets in England and around the world. Marvin embarked on a solo career in 1990 which left the Shadows inactive for the next decade or so. But they reunited in 2004 for a series of farewell concerts that ended up being extended into the following year, and yielded a live album and a concert DVD. 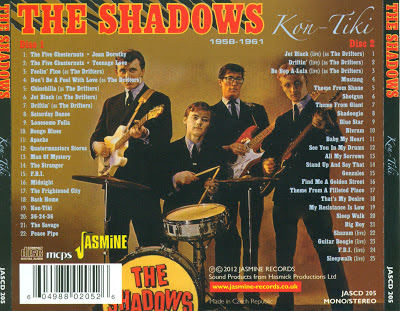 With lead guitarist Hank B. Marvin's twangy, melodious Stratocaster, The Shadows provided the template and inspiration for a thousand copycat groups worldwide and were the most influential and successful British instrumental group of all time.

This compilation comprises everything they recorded between 1958 (when they were originally known as The Drifters) and the end of 1961, including an unfeasibly-rare South African EP.

Also includes a pre-Drifters single featuring Hank B. Marvin and Bruce Welch. When they were with The Five Chesternuts.