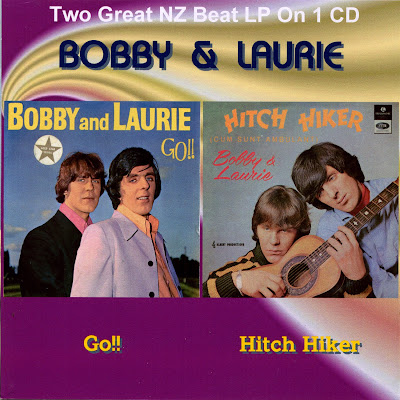 Sort of a mishmash of the Beatles, Peter & Gordon, and the Everly Brothers, Bobby & Laurie were one of Australia's first and best responses to the British Invasion. Comprised of Bobby Bright and Laurie Allan (who were both guys), they released no less than eight singles and three albums in Australia in 1965 and 1966. Writing much of their own material, they were quite popular in their day down under, although they made no impact whatsoever on the international scene. Featuring close harmonies in the Beatles' style, they were actually one of the better British Invasion-inspired acts, outclassing many U.K. groups following in the Fab Four's footsteps. Leaning toward the tougher rather than the wimpier side of Merseybeat, they also roamed fairly far afield for their cover material, choosing relatively obscure U.S. R&B numbers and British beat B-sides and flops. They pursued an increasingly country & western-oriented direction before splitting at the end of 1966.
At this time, Bobby & Laurie started working with a Blackmore-managed backing band The Rondells (previously called The Lincolns and The Silhouettes). The duo reached their peak in late 1964, busily touring the country and appearing in numerous concert and television performances. They had dozens of engagements and personal appearances every week, with as many as six shows on a Saturday night. One unusual performance was playing 'Tweedledum' and 'Tweedledee' in a Christmas pantomime production of Alice In Wonderland at the Tivoli Theatre in Melbourne in December 1964.

In early 1965 the pair appeared on the Teen Scene music television show on the ABC, where they were famously dragged off the stage by screaming female fans. They appeared in the premiere episode of Channel 0's new children's program the Magic Circle Club on 23 January, playing characters 'Twoddle' and 'Boddle'.

They released three more successful singles on the Go label during 1965: Someone (which reached #3 in Melbourne), Judy Green and Crazy Country Hop which reached #25.

In 1966 they switched to the Albert Productions label, releasing Sweet And Tender Romance and Hitch Hiker, which gave them a national number-one hit for five weeks in May and June. At about this time they also changed management from Blackmore to Mal Fisher. On the strength of Hitch Hiker, the ABC gave them their own television show, It's A Gas, which was later rebadged as Dig We Must. The name change was designed to attract a more sophisticated 'adult' market, but lost the duo much of their 'teen' appeal which led to friction between the two singers.
After recording their last album Exposaic, the pair officially split in early 1967 after just three years as Australia's chart-topping stars. ~ http://en.wikipedia.org/wiki/Bobby_%26_Laurie 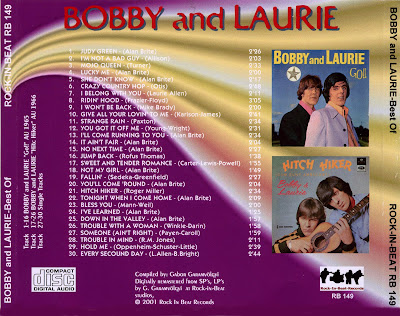