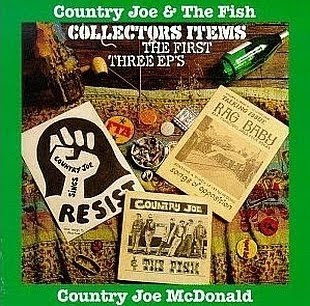 If you mention the name Country Joe & the Fish to Americans born in 1955 or earlier, chances are that they'll know the band you're talking about, at least to the degree that they know their most widely played and quoted song, "I Feel Like I'm Fixin' to Die Rag." The problem is, that particular song captured only the smallest sliver of who Country Joe & the Fish were or what they were about. One of the original and most popular of the San Francisco Bay Area psychedelic bands, they were also probably the most enigmatic, in terms of who they actually were, and had the longest and strangest gestation into becoming a rock band. And Joe McDonald may have written the most in-your-face antiwar, anti-military song to come out of the 1960s, but he was also one of the very few musicians on the San Francisco scene who'd served in uniform.

MORE: http://www.allmusic.com/cg/amg.dll?p=amg&sql=11:fpfixqr5ldje~T1
Country Joe & The Fish - The First Three EPs
Sequel (UK) 1987
Before making their leap into the "big time" and signing with the nationally distributed Vanguard Records in 1967, Country Joe McDonald and his group the Fish had already created a pair of self-produced and otherwise low-budget EPs as so-called "talking" issues of McDonald's own Rag Baby publication. The periodical itself was a Bay Area adaptation of the folkie's music intensive magazine Broadside. Collectors Items: The First Three EPs compiles those highly sought-after 7"s of vinyl onto CD — the contents of which earned Country Joe & the Fish (CJ&F) their initial flashes of national exposure — albeit limited to the underground "head shops" that stocked Rag Baby. The disc opens with a primordial incarnation of the Fish — consisting of McDonald (vocals/guitar) and his close musical associate Barry Melton (vocals/guitars) — augmented by Carl Shrager (washboard), Bill Steel (bass), and Mike Bearslee (vocals/guitar). Their decidedly D.I.Y. instrumentation and delivery is a clear indicator of the folkie roots that were strikingly similar to that of other burgeoning combos in the Bay Area. The original A-side boasted two CJ&F tunes: "I Feel Like I'm Fixin' to Die Rag" and "Superbird." Here, modern listeners are treated to a version of "I Feel Like..." listed as "Take 1" — replete with the apropos effects of machine guns and round-upon-round of rapid fire mortars — while the alternate "Take 2" contains the infamous "F-U-C-K" Woodstock chant. On the B-side was a folk singer/songwriter named Peter Krug whose contributions were equally as apocalyptic as CJ&F's. Krug's "Fire in the City" was also covered by jazz vocalist Jon Hendricks and a then virtually unknown backup unit who had just changed their name from the Warlocks to the Grateful Dead. The number is coupled with the blatantly anti-combat "Johnny's Gone to War." The second EP debuts the electric incarnation of CJ&F, solidifying the existence of Rag Baby as well as the combo's amplified psychedelic rock leanings. Side A is composed of "(Thing Called) Love" and "Bass Strings" — two relatively short numbers at under four minutes apiece. Allowing themselves the freedom to stretch out in a style and delivery more akin to their public performances, "Section 43" clocks in at nearly seven minutes. All three of these tunes would be reworked on CJ&F's second long-player Electric Music for the Mind and Body (1967). The final EP was cut by McDonald backed by Groonta and is a mix of the acoustic "Kiss My Ass"/"Tricky Dicky" and electric "Free Some Day." The disc was recorded for the express purpose of being sold for $1.50 at the infamous "Free the Army" political and musical review that included appearances by such notables as Jane Fonda and Donald Sutherland. The show toured underground coffeehouses in 1971 and McDonald cut this disc in support of — and for sale at — these performances.