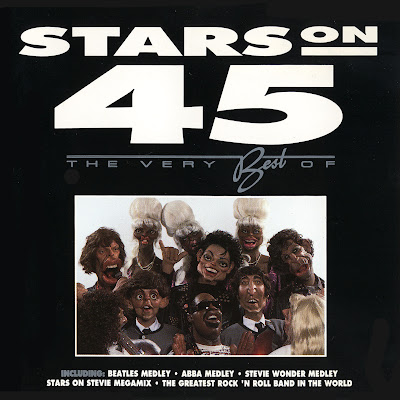 The story of Starsound, who started the medley craze in 1981, began two years earlier in a disco in Montreal, where one of the resident DJs was Michel Gendreau. Into his club walked Michel Ali, who had with him a tape created from a bootleg white-label recording originating in Holland of a medley of Beatles songs called "Lets Do It in the 80s Great Hits" and credited to an unknown group named Passion. The record used excerpts from the original Beatles records as well as snippets from the Archies' "Sugar Sugar," Shocking Blue's "Venus," and the introduction to the Buggles' major hit "Video Killed the Radio Star." The bootleg was poor quality, the tape contained more noise than music, and it was badly produced, but Gendreau believed it was a good idea, although he was reluctant to play it at peak time. This was the very late '70s and disco had been king of the dancefloor for several years, with new tracks created by the Bee Gees, Nile Rodgers and Bernard Edwards, and a host of new producers with new groups and singers. The last thing the disco-going clientele wanted was a series of Beatles and other 1960s material.


Ali began working with sound engineer Paul Richer to create a cleaner version of "Let's Do It in the 80s Great Hits," and in order to satisfy Gendreau's fears about oldies, they added some recent hits, including "Funky Town" by Lipps, Inc. and "Working My Way Back to You" by the Detroit Spinners. By starting with current hits, then introducing the Beatles tracks, the dancefloor would not empty as was feared, but the dancing would continue as the 1960s hits were set to the same definable beat as the current hits. One of the 1960s hits used was "Venus" by Shocking Blue, the copyright of which was owned by a Dutch record company, Red Bullet Records, and when this was brought to the attention of its manager back in Holland, Freddy Haayen, who, although incensed that his track was part of the medley, realized the potential commercial viability of the medley idea and instead of contacting his lawyers, he contacted record producer Jaap Eggermont, formerly of the band Golden Earring, and asked him whether it would be possible to create a legal version. Eggermont knew enough about copyright to realize that it would be a futile exercise to approach the original rights holders, so he brought together a group of session singers to re-record the vocals as close as possible to the originals, using Bas Muys from the Dutch group Smyle as the voice of John Lennon, Hans Vermeulen from Sandy Coast as George Harrison, and Okkie Huysdens as Paul McCartney. The tracks that had been used on "Let's Do It in the 80s Great Hits" and the recut version — "Sugar Sugar," "Venus," "Funky Town," and "Video Killed the Radio Star" — were also retained, and a linking piece was written to introduce the song with the tag line "The Stars on 45 keep on turning in your mind," sung by Jody Pijper to a pumping disco beat that continued throughout the medley.

It was originally released on a 12" single only and ran for 16 minutes. When radio stations across Europe began editing it themselves for suitable daytime play, Eggermont took the "Stars on 45" introduction and added just the first verses of "Venus" and "Sugar Sugar" and a further three minutes of the Beatles medley, releasing a 7" single that swept the world and began a craze that lasted throughout the whole of the early '80s. Depending on the territory, the group was either known as Starsound (as in Europe) or Stars on 45 (in the U.S.A.), and the title of the single that finally went on general sale was the longest ever title to reach the charts, as the individual song publishers insisted on their track forming part of the title, which became officially &"Intro Venus/Sugar Sugar/No Reply/I'll Be Back/Drive My Car/Do You Want to Know a Secret/We Can Work It Out/I Should Have Known Better/You're Going to Lose That Girl/Stars on 45," although it was often shortened simply to "Stars on 45." The single was a great success, peaking at number two in the U.K. (with most of the sales on the 12" format) and going all the way to number one, sandwiched by two separate runs of Kim Carnes' biggest-selling hit of the year, "Bette Davis Eyes," in the U.S.A.

It was inevitable that this success would be followed by an expanded album project, and less than a month after the single had been released, a long-player was ready that included an expanded Beatles section with the songs "Ticket to Ride," "Eleanor Rigby," "And Your Bird Can Sing," "Get Back," "Eight Days a Week," "It Won't Be Long," "Day Tripper," "Good Day Sunshine," "Here Comes the Sun," "While My Guitar Gently Weeps," "Taxman," "A Hard Day's Night," "Things We Said Today," "If I Fell," "Please Please Me," "From Me to You," and "I Wanna Hold Your Hand" and many of the 1960s oldies from the original bootleg, "Sherry" (Four Seasons), "Cathy's Clown" (Everly Brothers), "Breaking Up Is Hard to Do" (Neil Sedaka), "Only the Lonely" (Roy Orbison), "Silly Love Songs" (Wings), "Jimmy Mack" (Martha Reeves), "Here Comes That Rainy Day Feeling Again" (Fortunes), and "Itsy Bitsy Teeny Weeny Yellow Polka Dot Bikini" (Brian Hyland). Although the album stopped at number nine in the U.S.A., it did even better than the single in the U.K., going all the way to number one for five weeks in May and June and ended the year as the tenth best-selling album of 1981.

The next project, centered around the hits of ABBA, using the voice of Claudia Hoogendoorn as both the ABBA female singers Agnetha Fдltskog and Anni-Frid Lyngstad. In the U.S.A., a second medley had already been released featuring more Beatles excerpts, but the novelty was already wearing off and despite the success of the first medley, the second one stalled at number 67. In Britain, however, the medley craze was just beginning and "Stars on 45, Vol. 2" followed the first volume to the runner-up position. A second album was released, titled the same as the single, and expanded with 17 excerpts of pop hits from the 1960s and 1970s, ranging from soul tracks ("Papa Was a Rolling Stone," "Dance to the Music," "Reach Out I'll Be There") to fun pop hits ("Sugar Baby Love," "Do Wah Diddy Diddy," "California Dreaming"). It also featured a Supremes medley and an assortment of instrumental intros including the "Star Wars Main Title Theme," "Kung Fu Fighting," "Layla," "Do Ya Think I'm Sexy," "Don't Stop Til You Get Enough," "Baker Street," and "The Eve of the War."

By the autumn of 1981, a bandwagon had well and truly been developed and many groups were releasing their own medleys of their former hits, including the Beach Boys, the Hollies, and even the Beatles themselves under the title "The Beatles Movie Medley" (using the original vocals this time). Lobo hit the charts with a Harry Belafonte Caribbean medley, Startrax covered the Bee Gees, Gidea Park did the Beach Boys, and the Four Seasons and Tight Fit hit with "Back to the 60s," a medley similar to the original bootleg that started it all. Even the Royal Philharmonic Orchestra got in on the act with "Hooked on Classics," a medley of famous classical pieces. Starsound themselves used Tony Sherman as a Stevie Wonder soundalike on "Stars on Stevie," Peter Vermeij as Mick Jagger on "The Greatest Rock n Roll Band in the World," Peter Douglas as Frank Sinatra on "Stars on Frankie," and even Patricia Paay, Yvonne Keeley, Sylvana van Veen, and Ingrid Ferdinandusse as the Andrews Sisters, although the latter two did not actually perform any of the singing.

A third album featuring the Rolling Stones and Stevie Wonder medleys was released in the spring of 1982, but by then it was all over and the album peaked at a miserable number 94 for just one week. The medley was being parodied by artists such as Chas & Dave with their selection of old-time music hall and London songs, "Stars Over 45," Ivor Biggun with "Bras on 45," and Weird Al Yankovic with his medley "Polkas on 45." The session musicians all went their separate ways and Starsound or Stars on 45 was left as just a memory of a craze of medleys that swept the world in 1981. The first two can still be heard at clubs, more than a quarter of a century later, particularly the cheesy type where a DJ needs a medley to liven up the dancefloor, and Starsound has managed to retain its credibility for longer than Jive Bunny & the Mastermixers, who revived the medley format eight years later to even greater but short-lived effect. 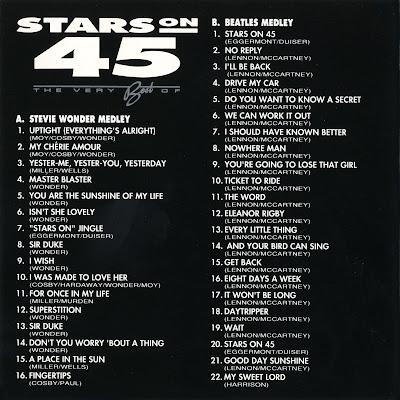 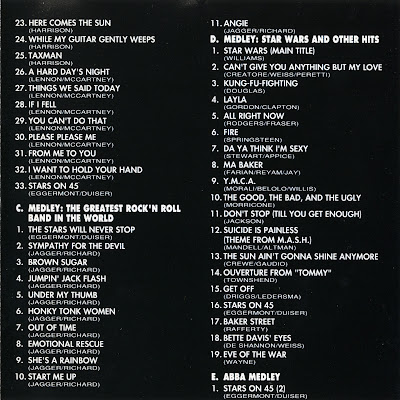 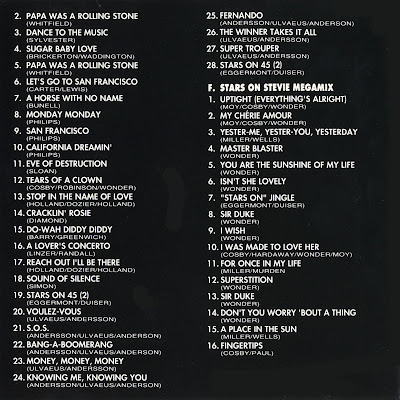