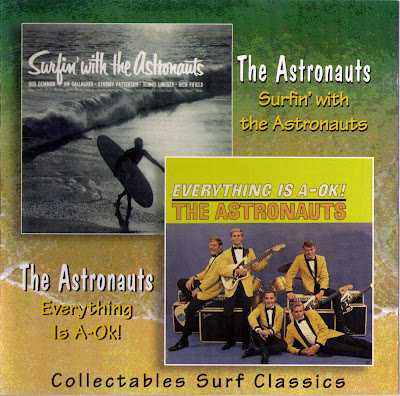 Surfin' with the Astronauts 1963
Considering that, by their own admission, the Astronauts had not only never played surf music, but had never heard of surf music before they were signed to record this album -- which was done in two days during May of 1963 -- the results are not only very good, but astounding. The long-player, which also marked only the group's second time in the recording studio (and the first for this version of the band), does what any good surf music album should do, imparting a sense of forward momentum and never letting up. From the opening cut, "Baja," the band acquits itself well on the instrumentals and decently on the vocal numbers, which include "Susie-Q," "Surfin' USA," and "Baby Let's Play House." No one was going to forget the Beach Boys, Dale Hawkins, or Elvis Presley over the renditions here, although in fairness, neither are they terrible -- just uninteresting if you know the originals. With one original here (the group-composed "Kuk"), the Astronauts were very much slaves to outside writers, but the band and its producer had a good sense of where to look for material. The result is an album that stands with the best of the surf albums of the period, even if it's not otherwise exceptional on its own terms. ~ by Bruce Eder
1. The Astronauts - Baja (2:28)