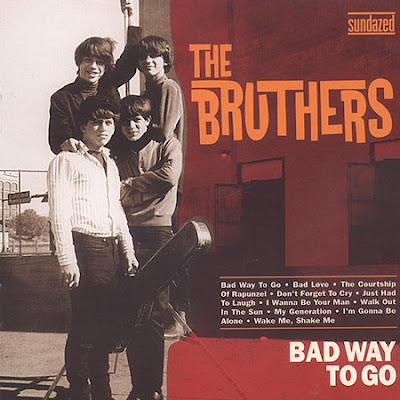 REPOST
The Bruthers only released one single, "Bad Way to Go"/"Bad Love," in 1966. But the A-side eventually became one of the most highly regarded mid-'60s garage band obscurities after its reissue on Pebbles, Vol. 8. It was also one of the rawest garage band tracks to gain release on a major label (RCA), its furiously fast, shifting rhythms, berserk circular guitar and organ riffs, and malicious put-down lyrics bringing to mind something like a garage band at a harem.

Although the Bruthers did do some more recording in a similarly tightly coiled, slightly unhinged manner for RCA, the label didn't issue anything else before dropping them, although a few unreleased RCA outtakes would eventually surface on a Bruthers CD compilation.The Bruthers were actually real brothers: Alf Delia (who wrote most of the original material they recorded, including "Bad Way to Go"), Frank Delia, Mike Delia, and Joe Delia. The Pearl River, New York quartet had started performing in the early 1960s, and by the mid-'60s hooked up with manager Sid Bernstein, who also handled the Young Rascals and the Blues Project (as well as promoting mid-'60s New York City concerts for the Beatles). The single made no commercial impact, depending upon revival from garage collectors to reach a bigger audience, starting with its inclusion in the Pebbles series, and culminating with a full CD on Sundazed in 2003 that matched both sides of the single with RCA outtakes and some demos from 1965 and 1967. After the Bruthers broke up in 1967, keyboardist Joe Delia went on to play as a sideman for numerous acts, playing and arranging David Johansen's 1987 hit "Hot Hot Hot," and scoring many feature films, documentaries, and TV series. Guitarist Frank Delia eventually directed videos for the Ramones, Wall of Voodoo, and Jefferson Starship, as well as some episodes for television series.

1. The Brothers - Bad Way To Go (2:55)
2. The Brothers - Bad Love (2:17)
3. The Brothers - The Courtship Of Repunzel (2:49)
4. The Brothers - Don't Forget To Cry (2:52)
5. The Brothers - Just Had To Laugh (2:05)
6. The Brothers - I Wanna Be Your Man (2:33)
7. The Brothers - Walk Out In The Sun (2:42)
8. The Brothers - My Generation (2:17)
9. The Brothers - I'm Gonna Be Alone (2:41)
10. The Brothers - Wake Me, Shake Me (3:05)
11. The Brothers - The Courtship Of Repunzel (In (2:58)
Considering the Bruthers released just one single, it took some digging to manufacture an entire album of material from their brief legacy. Sundazed, as usual, was up to the task, compiling the 11-track Bad Way to Go CD, all but two of the songs coming from previously unreleased studio recordings. Both sides of their sole 1966 45, "Bad Way to Go"/"Bad Love," are here of course, and "Bad Way to Go" is certainly the best of the bunch. Its tense, almost circus-like up-and-down riffs, archetypically snarling mid-'60s garage vocal, doom-clouded organ, and furious tempo changes make it one of the best '60s garage records to have escaped inclusion on the Nuggets box set. The previously unreleased "The Courtship of Rapunzel," recorded just a couple of months later, had a similarly manic-aggressive feel, though perhaps its roller coaster riffs were a little too similar to "Bad Way to Go" to raise it to the same level. A few more Alf Delia originals here are enjoyable teen outrage in the same herky-jerkyish style, the 1965 demo "I'm Gonna Be Alone" betraying a melodramatic pre-Beatles influence along the lines of Del Shannon, and the folk-rock-influenced late-1966 outtake "Walk in the Sun" offering evidence of possible growth into a more mature sound. But the brief set's diluted by some typically energetic-but-derivative garage covers (of the Beatles' "I Wanna Be Your Man," the Who's "My Generation," and the Blues Project's "Wake Me, Shake Me"), as well as an instrumental version of "The Courtship of Rapunzel." ~~~ by Richie Unterberger
Posted by : D&J at Thursday, September 30, 2010