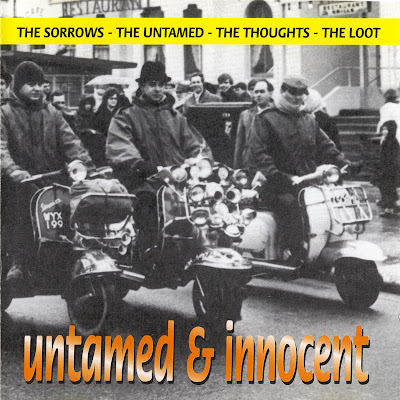 01 THE THOUGHTS - If you don't co me back *
02 THE THOUGHTS - Until you love someone *
03 THE UNTAMED - One more heartache *
04 THE UNTAMED - I'll go crazy *
05 THE UNTAMED - Daddy lang legs *
06 THE SORROWS - You got what I want *
07 THE SORROWS - No, No, No *
08 THE SORROWS - Take a heart *
09 THE SORROWS - Let me in *
10 THE UNTAMED - So long
11 THE UNTAMED - Just wait
12 THE UNTAMED - Once upon a time
13 THE UNTAMED - I'll be crazy
14 THE UNTAMED - My baby is gone
15 THE UNTAMED - It's not true
16 THE UNTAMED - Gimme, gimme so me shade
17 THE UNTAMED - Daddy long legs
18 THE UNTAMED - Trust yourself a little bit
19 THE LOOT - Baby come closer
20 THE LOOT - Whenever you're ready
21 THE LOOT - I got what you want
22 THE LOOT - Try to keep it a secret
23 THE LOOT - She's a winner
24 THE LOOT - Save me
25 THE LOOT - Radiocity
* previously unreleased live recording 1966
***
The Sorrows.One of the most overlooked bands of the British Invasion, the Sorrows offered a tough brand of R&B-infused rock that recalled the Pretty Things (though not as R&B-oriented) and the Kinks (though not as pop-oriented). Their biggest British hit, "Take a Heart," stopped just outside the U.K. Top 20; several other fine mid-'60s singles met with either slim or a total lack of success. With the rich, gritty vocals of Don Fardon, taut raunchy guitars, and good material (both self-penned and from outside writers), they rank as one of the better British bands of their era, and certainly among the very best never to achieve success of any kind in the U.S. After their sole LP (also titled Take a Heart), they issued a couple of singles with psychedelic and Dylanesque overtones, and had somehow relocated to Italy in the late '60s, where they played out their string with material in a much more progressive (and less distinctive) vein. Don Fardon had a Top 20 hit in America with a pre-Raiders version of "Indian Reservation" in 1968.


The Untamed made just five singles in 1964-1966 and never approached hit status, but those 45s are well respected by aficionados of rare British Invasion music. The group were in the somewhat raw R&B/rock crossover mold favored by many U.K. mod bands in the mid-'60s, but placed equal or greater emphasis upon the organ, as opposed to the more frequently utilized guitar. There was also a cool jazz-blues feel to much of their material, although this was not as pronounced as it was, say, in the recordings of Georgie Fame. In their best singles, they unleashed some unpredictable melodic shifts and key leaps, further helping to distinguish them from the dozens and possibly hundreds of similar struggling British mod groups that managed to cut a disc or three during the era. ... Read More...

The Loot were something of a poppier, minor-league Troggs. Like the Troggs, they came from Andover. Guitarist Dave Wright had been an early member of the Troggs, and briefly replaced Chris Britton in the Troggs when Britton left the band for a short spell in 1967. The Loot recorded for Page One, the label run by Troggs manager Larry Page, and issued "Baby Come Closer" as their 1966 debut single; the song would also be done by the Troggs on their second LP.


The Loot never did have anything close to a hit, in large part because they never did corral the right song for any of their half-dozen 1966-1969 singles. They played fair but hardly outstanding moddish pop/rock, a bit lusty and raw sometimes, but not nearly as much so as the Troggs. Seven of the 12 songs from their singles are included on the various-artists compilation Untamed & Innocent, which also has rarities from fellow collector-favorite mod bands the Sorrows, the Untamed, and the Thoughts.