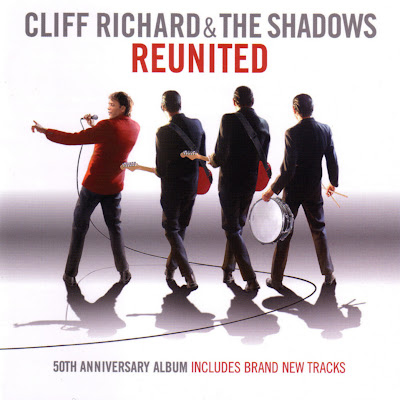 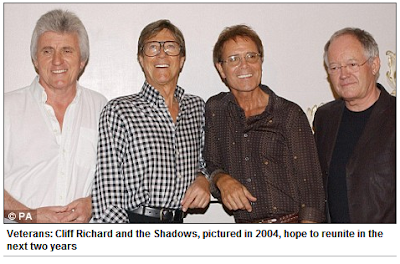 http://www.dailymail.co.uk/tvshowbiz/article-
1061970/Cliff-Richard-
The-Shadows-regroup-world-tour.html
Britain's answer to Elvis Presley, Richard (born Harry Webb) dominated the pre-Beatles British pop scene in the late '50s and early '60s. An accomplished singer with a genuine feel for the music, Richard's artistic legacy is nonetheless meager, as he was quickly steered toward a middle-of-the-road pop direction. Several of his late-'50s recordings, however, were genuinely exciting Presley-esque rockers -- especially his first hit, "Move It" (1958) -- and gave British teenagers their first taste of genuine homegrown rock & roll talent. Backed by the Shadows -- clean-cut instrumental virtuosos who became legends of their own …  » Read more
The Shadows are usually thought of as the quintessential British instrumental group and, along with the American band the Ventures and the Swedish group the Spotnicks, one of the most popular instrumental groups in the world. But that barely tells the story of their true significance in the history of British rock & roll -- including the fact that they were the first home-grown British rock & roll band to dominate the U.K. charts; or that they weren't originally an instrumental group, either. The band's roots go back to Chesthunt, Hertfordshire, in early 1958, when a young Indian-born singer/guitarist named Harry Webb joined with drummer Terry Smart and guitarist Norman Mitham to form a group that they ended up calling » Read more
Cliff Richard & The Shadows - Reunited
Personnel
Cliff Richard - vocals
Hank Marvin - lead guitar
Bruce Welch - rhythm guitar
Brian Bennett - drums & percussion
Warren Bennett - keyboards
Mark Griffiths - bass guitar
***
01.I Could Easily Fall (In Love With You)
02.The Young Ones
03.Move It
04.Living Doll
05.Batchelor Boy
06.Nine Times Out Of Ten
07.C'Mon Everybody
08.Travelling Light
09.It'll Be Me
10.In The Country
11.On The Beach
12.The Next Time
13.Please Don't Tease
14.Sea Cruise
15.Willie And The Hand Jive
16.Summer Holiday
17.Do You Wanna Dance
18.Don't Talk To Him
19.Time Drags By
20.Gee Whiz It's You
21.Lucky Lips
22.Singing The Blues 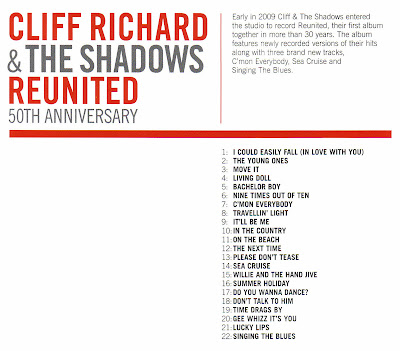 On 11 November 2008, Cliff Richard's official website announced that 20 years after their latest concert together, Cliff and The Shadows would reunite to celebrate their 50th anniversary in the music business. A month later they performed at the Royal Variety Performance. In 2009 Cliff and The Shadows will bring their partnership to an end with the "Golden Anniversary concert tour of the UK".[dated info] A new album by Cliff Richard and the Shadows was released in September 2009.

Titled Reunited, It was their first studio project in forty years. The 28 tracks recorded comprise 25 re-recordings of their earlier classics, with three "new" tracks, originally from that era (and earlier), the single "Singing the Blues", along with Eddie Cochran's "C'mon Everybody" and the Frankie Ford hit "Sea Cruise". The tracks are to be spread across the single and its bonus tracks, a limited edition version of the album, as well as a standard CD release. The album charted at number 6 in the UK charts in its opening week and peaked at number 4. The reunion tour is to continue into Europe in 2010.
Posted by : D&J at Monday, May 16, 2011