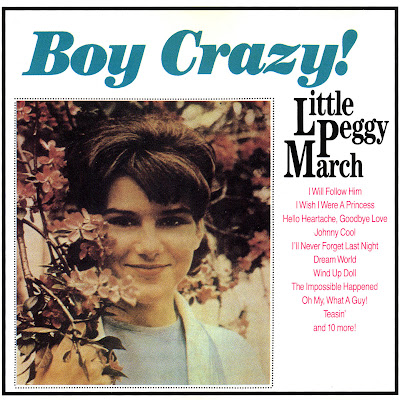 Little Peggy March, age 15 years old, only ever had one big hit during her decade with RCA Records, but that song, "I Will Follow Him," spent three weeks at the number one spot on the charts and even topped the R&B charts for a week as well. It pretty well helped define the early girl group sound, as much as the Shangri-Las' "Leader of the Pack" or "Great Big Kiss" did at the later end of the musical genre. Her subsequent hits, "I Wish I Were a Princess" (which was featured prominently in John Waters' period romp Hairspray) and "Hello Heartache, Goodbye Love," scored much lower in the Top 40. RCA continued to record March for ten years, right into the early '70s, but she never scored an American hit of any consequence after early 1964. By contrast, in Europe, she was a popular recording artist for many years and scored several major hits, especially in Germany, where she moved in 1969.

Margaret Battavio, aka Little Peggy March, had dreamt of a singing career for most of her young life, and had been winning talent contests as a young girl. She was signed to RCA in 1962 at age 14, and made her debut that year with a cover of the song "Little Me," taken from a Sid Caesar Broadway hit, which vanished without a trace. Her second single was to ensure her place in the pop music reference books, however.
English-born girl singer Petula Clark, who'd been recording since the mid-'50s, had recently scored a hit in France with a song called "Chariot" on the Vogue label. RCA producers Hugo Peretti and Luigi Creatore ("Hugo and Luigi"), best known today for their work with Sam Cooke, found the song and got March to record the number in a new version with simpler lyrics, now known as "I Will Follow Him." Clark's recording was a slow, moody, soulful piece, with the singer seeking the depths of the song's meaning, all without the doo wop-style "did-ip, da did-ip, da did-ip" chorus. It sounded like the work of a woman. March's recording, by contrast, picked up the tempo, added a doo wop-style male chorus and a pulsing arrangement, prominent drums and chorus, and her breathy, breathless reading of the lyrics. It sounded like the work of a passionate girl, and it defined the girl group sound as much as numbers like "Johnny Angel."
March eventually released an entire album built around her sudden number one hit, including "I Wish I Were a Princess," which reached the Top 40 in 1963. The rest of the album was a pretty collection of tuneful teen pop, the world of romance as seen through the persona of a 15-year-old, including such numbers as "My Teenage Castle (Is Tumbling Down)" and "Johnny Cool." She subsequently saw modest chart success in America with the magnificent "Hello Heartache, Goodbye Love," a near-cousin of "I Will Follow Him" in beat and arrangement, which reached the Top 30 and also became a hit in England; and also with "The Impossible Happened," a funny, silly little teenage girl's romantic lament, which made the American Top 50. In early 1964, March was still reaching the lower ends of the charts with Paul Anka's "(I'm Watching) Every Move You Make," but after that, music began changing very rapidly with the advent of the British Invasion sound. She recorded 18 singles for RCA between 1964 and 1971 and several albums as well, none of which charted in any serious way in America.
As it turned out, the United States comprised only one part of the audience she was trying to reach, and listeners in Europe were far more interested in March as an American pop star than Americans were. She moved to Germany with her husband/manager, Arnie Harris, and enjoyed a career in recording, variety show performances, and television appearances. In the '80s, March returned to America, where she continues to be best known for "I Will Follow Him" and the naive early girl group sound that it represents, some 35 years after it was first released. 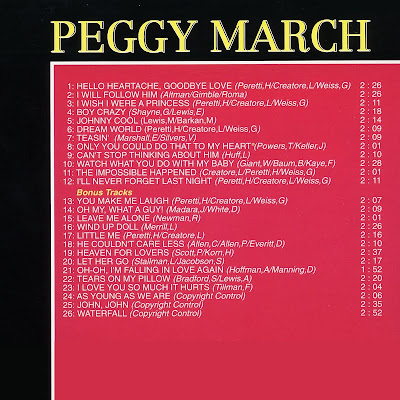 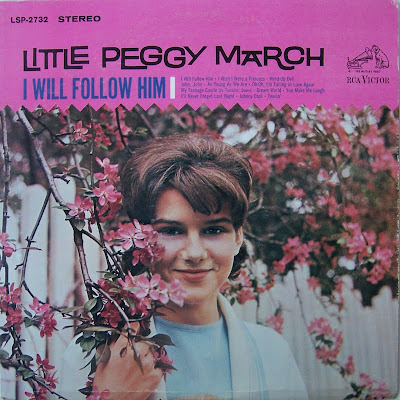