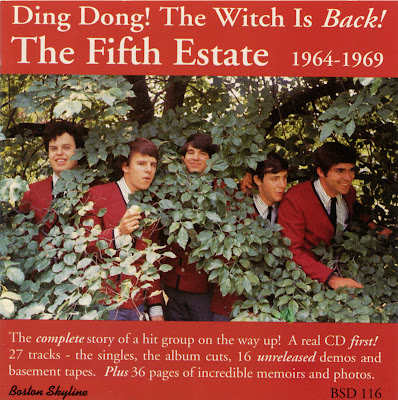 In the mid-'60s, Wayne Wadhams performed in a band called the D-Men that evolved into the Fifth Estate. They went Top 15 in 1967 with a novelty remake of the Wizard of Oz tune "Ding Dong! The Witch Is Dead!." Their only hit on Jubilee Records is very misleading. This group should be as sought after as Moulty & the Barbarians.

This is a very generous collection of demos: songs they wrote for the Righteous Brothers and Cilla Black, and covers of Buddy Holly's "It's So Easy''" and John Lee Hooker's "Boom Boom." This album really goes across the '60s spectrum, which makes it so fun and so unique. The rhythm tracks to "I Wanna Shout/Tomorrow Is My Turn" sound like the Ventures performing in your living room; the second portion of the song descends into a dirty "In-A-Gadda-Da-Vida"-type riff. With all the cult fascination for Roky Erickson and the Chocolate Watchband, it is amazing what the 64-plus minutes on this disc reveal, and even more amazing that this music isn't as sought after as so many other bands from that era. A novelty hit, after all, hardly has the lustre of a Standells riff or ? & the Mysterians' organ passages. The unreleased 1966 single "How Can I Find the Way" sounds like Barbara Harris of the Toys. The liner notes on the back of the CD call this "A real first: the complete recorded output and memoirs of a group who recorded for four labels between 1964 and 1967." The demo for their breakthrough hit, the cover from The Wizard of Oz (as well as the hit version) is here, and when you play that next to "Love Isn't Tears Only," their demo for the Righteous Brothers, the abilities of these New Englanders comes totally into focus. It would've been perfect for the Walker Brothers or Tom Jones. The McGregor Clothes jingle is lifted carefully from Chad & Jeremy's 1964 hit "Yesterday's Gone." Murray the K even makes an appearance -- a tape from his WINS-AM show recorded in 1964 appears in between songs four and six. Early work by future producers Bill Szymczyk and Phil Ramone are also included; the liner notes by Joe Tortelli are as thorough as his lengthy essay in the Delaney & Bonnie package for Rhino. The 28 tracks, featuring 26 songs, the Murray the K bit, and the clothing jingle would be a good study course in the life of a rock band who hit it big, and all their work that went in between. Wayne Wadhams is a major producer who has worked with jazz act Full Circle on Columbia, among many others. As producer David Foster emerged from the Canadian band Skylark, the history of producer Wadhams compiled here with his Fifth Estate is more than just a good study. As stated, this is a real period piece for collectors of vintage '60s music. 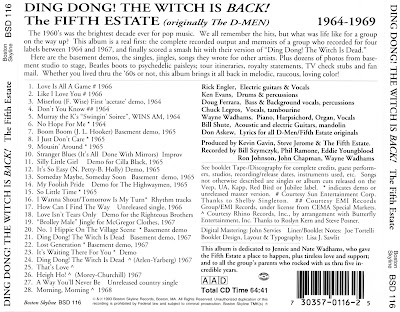