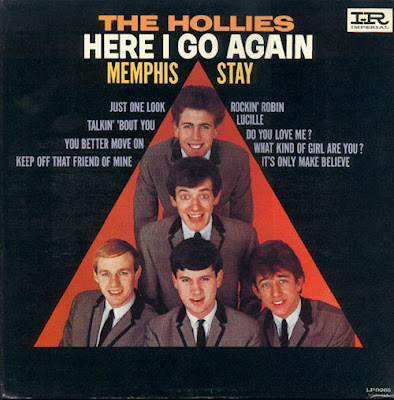 Here I Go Again is essentially an American issue of the Hollies' first LP, Stay With The Hollies. It featured the group's first two US hits as well as covers of well-known R&B songs, not unusual for British Invasion groups of the day.
http://en.wikipedia.org/wiki/Here_I_Go_Again_(album)

Of all the English bands who achieved international success during the first wave of the British Invasion, none comb
ined youthful rock ’n’ roll energy with musical sophistication more compellingly than the Hollies. The Manchester quintet effortlessly combined the effervescent, Everly Brothers-inspired vocal harmonies of Allan Clarke, Graham Nash and Tony Hicks with a muscular rhythm section driven by the brilliant drummer Bobby Elliott, creating one of their era’s most beloved and enduring musical catalogs.
As was standard practice with British acts at the time, the Hollies’ early albums reached American shores in very different form than the versions that were released overseas, with alternate track listings and different cover art than their U.K. and European counterparts. Although these unique variants are the form in which millions of American fans first experienced these historic albums, they have been out of print for decades, and have long been obtainable only at inflated collectors’ prices.
Released in America in 1964 by Imperial Records, Here I Go Again was the Hollies’ U.S. debut, and is rated by many fans as superior to its British counterpart, Stay with the Hollies. Here I Go Again offers an accurate representation of the Hollies’ early repertoire, comprised largely of distinctive covers of American R&B and rock ’n’ roll classics. In addition to the ultra-catchy title tune and their hit covers of Maurice Williams’ “Stay” and Doris Troy’s “Just One Look,” the album finds the Hollies applying their trademark style to such iconic numbers as Chuck Berry’s “Memphis,” Little Richard’s “Lucille” and Arthur Alexander’s “You Better Move On.”
1.  Here I Go Again
2.  Stay
3.  Memphis
4.  Lucille
5.  You Better Move On
6.  Talkin’ ’Bout You
7.  Just One Look
8.  Keep Off That Friend of Mine
9.  Rockin’ Robin
10. Do You Love Me?
11. What Kind of Girl Are You?
12. It’s Only Make Believe
http://talkinaboutmygeneration.com/2010/04/the-hollies/