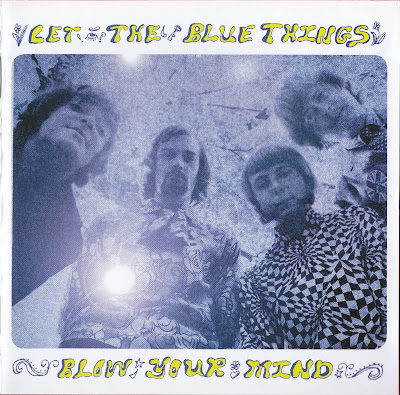 Along with the Remains, the Blue Things are serious contenders for the title of the Great Lost Mid-'60s American Band. The Kansas group was extremely popular in the Midwest and Texas, but remained unknown on a national level, despite a deal with RCA. Piloted by the songwriting of singer and guitarist Val Stecklein, the group often sounded like a cross between the Byrds and the Beau Brummels with their melodic, energetic, guitar-oriented folk-rock and haunting harmonies. The group's sole album (Listen & See, 1966) and several singles chart a rapid growth from British Invasion-like material with a heavy Searchers and Buddy Holly influence to full-blown psychedelic efforts with careening guitars, organ, and backward effects. Quite innovative for the time, these 1966 psychedelic singles met with no more than regional success. The group's impetus was derailed by the departure of Stecklein at the end of 1966, although they struggled on for a bit. Stecklein went to California and recorded a disappointing MOR folk album for Dot in the late '60s that reprised some of his Blue Things songs. 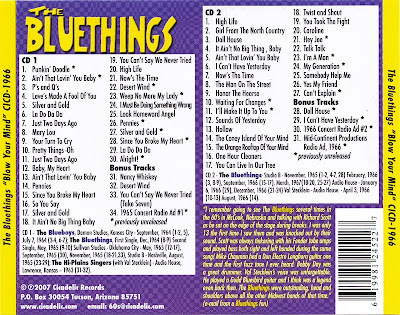 Hailing from Lawrence, Kansas, The Blue Things were to the mid-west what The Beatles were to England. Starting out in 1964, as The Blue Boys, they played a British Invasion type sound. Over their short lived career, they were to release a plethora of singles, that have become legendary for their innovation and originality. In 1966 The Blue Things changed their style to psychedelic and their sound was similar to The Beatles' sound on Revolver. This two cd set contains a career spanning 65 tracks with many previously unreleased recordings and stunning sound!
A 24 page booklet, details the complete career of the band and is rich in photos and recollections.
Look also:
http://dm-musicstations.blogspot.com/2008/04/blue-things-listen-see-1966.html
Posted by : D&J at Monday, June 13, 2011