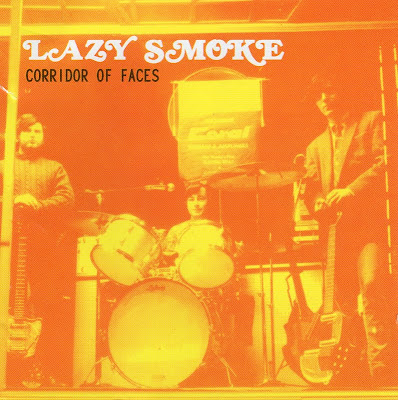 An obscure Massachusetts band of the late 1960s, Lazy Smoke offered a sort of Transatlantic psychedelic sound with roughly equal debts to American and British influences. Their biggest debt was to the Beatles, and although they were hardly exceptional in that regard, the resemblance commanded more attention due to the fairly close similarity of leader/chief songwriter John Pollano's vocals to those of John Lennon. Pollano's compositions bore a heavy Lennon stamp as well, often sounding like callower derivations of Lennon's more sedate White Album-era tunes. They pressed a few hundred copies of one album for the tiny Onyx label in 1969, Corridor of Faces, before splitting. The record has since attained a modest cult following, and was reissued on CD with a dozen bonus demos. 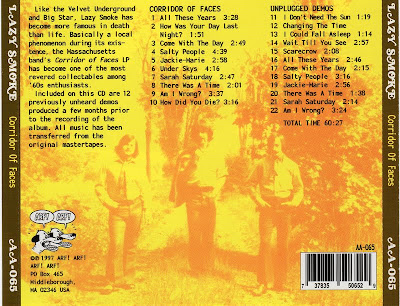 Lesser imitations of the early Beatles aren't hard to find, but it's much tougher to locate diligent imitators of the group's late-'60s sound. Here is one unheralded example, offeringa collection of mid-tempo, accessible late-'60s rock sung by a vocalist with a remarkable resemblance to John Lennon. But the songs, while not bad, are really unmemorable once the record's finished, making this more of an oddity than something to avidly seek. The CD reissue on Arf! Arf! adds a dozen previously unreleased acoustic demos by leader and songwriter John Pollano, mixing different versions of songs from the album with compositions that didn't make it onto the LP; these make his fixation with John Lennon '67-68 sound even clearer.
Thanks Cor for this !!!
Posted by : D&J at Sunday, July 17, 2011