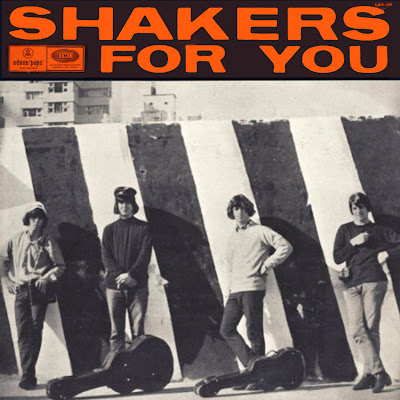 Los Shakers formed in 1963 in Montevideo Urguay,at first they played at the Hot Club , (jazz and
avant garde place) to join the james, in early '64  after they listened Beatles they decided to
change their music, instrument  to be beat combo. Soon after they moved to Argentina.


In 1964, Argentina's musical environment was completely dominated by the "New Wave"- pop singers singing catchy songs, making a big impact but disappearing as quickly as they came. They were the product of record producers of that era, with some honorable exceptions. In this region "Beatlemania" didn't find a worthy representative.
The first band that tried to fill this emptiness was "Los Buhos" (The Owls), but their lack of composing and instrumental skills led them to remain on the fringes.
Nevertheless, on the other side of De la Plata river in Uruguay, two brothers and two friends, all talented musicians that found an escape in the Jazz sessions at the Hot Club of Montevideo, had found in the Beatles what they where looking for, an expression of genuine music that represented them.
They were, Hugo and Osvaldo Fattoruso, Pelin (Roberto Capobianco) and Caio (Calos Villa). They were very young, the youngest was just 16 years old. When they saw "A Hard Day's Night" they decided to form a band which they called "The Shakers".
They started to play in the bars of Montevideo's and Punta del Este, with  huge success, they also recorded a few songs in very primitive conditions.
Then they got a contract with Odeon from Buenos Aires. Odeon  brought them to Buenos Aires where they recorded some records that failed to make much of an impact. Then they had incredible success with a single featuring two of their own compositions, "Break it all" and "More". This made the difference.
The sound was Beatles-like, but not an ordinary or rough copy, instead a copy of superior quality, superior than many of the foreign singers of that era. Added to this, was the quality of their own compositions, their own songs were of a surprisingly
high quality. At the same time they recorded an album with their own songs, "The Shakers", which included their latest hits, plus they began making live presentations and television appearances in Argentina and overseas. They recorded an album which was released in the USA (Break it all) and another one in Argentina (Shakers for you), comprised almost completely of their own songs, plus they released several singles with their songs and covers from The Beatles.
Slowly they started to get worn out, mainly from the number of live presentations that they did and also for another important reason, the lyrics. Although the quality of their music was high, the English lyrics were of a doubtful quality, sometimes even bad, and with the evolution of rock in Argentina, they started to be left out by the bands that decided to gamble and sing in Spanish.
That was the way Argentine national rock went, and The Shakers were left out, partly by their own decision.
The Shaker's last album (with their original members) was a masterpiece, they called it La conferencia secreta del Toto's Bar (The  Totos' Bar Secret Conference), this was inspired in its lengthy name by "The Sergeant Pepper's Lonely Hears Club Band".
Afterwards,  an album by the name "The Shakers" came out , but without Hugo and Osvaldo Fattoruso, who were involved in other projects in popular music in Rio de la Plata and in radio.
MORE:
http://60spunk.m78.com/shakers.htm
http://en.wikipedia.org/wiki/Los_Shakers