The Chocolate Watch Band - At the Love-In Live! Person At Cavestomp! 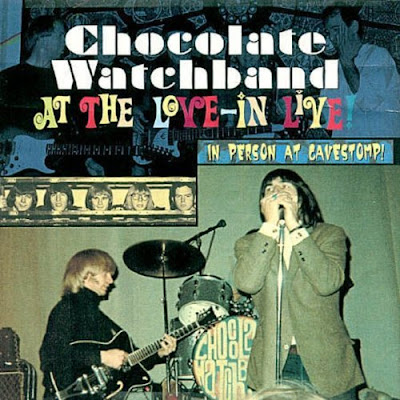 REQUEST
+ BONUS : Riot On Sunset Strip Original Soundtrack
The Chocolate Watch Band - At the Love-In Live!  Person At Cavestomp!
Recorded live at the Westbeth Theatre, New York, New York on November 6, 1999. Includes liner notes by Alec Palao & Dave Aguilar.
The classic lineup of the Chocolate Watchband, with David Aguilar on vocals, was arguably the best garage punk band of the mid-'60s, as well as one of its most short-lived. This live reunion from 1999 is therefore a most welcome addition to the band's canon. It gave the group a chance to refashion some old tunes that may have been rushed by producer Ed Cobb when they were first recorded. For example, "She Weaves a Tender Trap" seems more fully realized than the original, and it's nice to hear Aguilar, and not Don Bennett, sing "Let's Talk About Girls." But "Gone and Passes By," despite Aguilar's claims to the contrary, pales next to the original's sitarized Bo Diddley groove. The essence of garage rock was always spontaneity over fidelity, not to mention teen angst, so the idea of men in their fifties presenting pristinely recorded oldies might be alarming to purists. But there is no doubt it's great fun and the energy is contagious. The Chocolate Watchband have always owed their greatest debt to the Rolling Stones, from whom they borrowed their sneer and sound. Despite the fact that the Stones have had tours longer than the Watchband's original tenure, At the Love-In: Live will endure in your CD player long after No Security has been put away. ~ Brian Downing
Originally formed in San Jose, CA in 1964 and officially breaking up in March 1970, Chocolate Watchband is back. Today C.W.B. are considered both internationally and historically amongst the foremost of all American garage bands from that era. Releasing only 3 albums altogether under the supervision of producer/songwriter guru Ed Cobb in 1967, 1968 and 1969, C.W.B. are more popular and collectible today than ever. This live release includes CD-ROM video footage of CWB performing 'Sittin' There Standin', 'It's All Over Now Baby Blue', 'Let 's Talk About Girls' and an interview with C.W.B. leader David Aguilar. Recorded live at the Westbeth Theatre Centre NYC Nov. 6th 1999. Standard jewelcase. 2001 release.
The Chocolate Watchband: Dave Aguilar (vocals, harmonica, keyboards, percussion); Tim Abbott (guitar, background vocals); Michael Reese (guitar);
Producers: Jon Weiss, David Mann, The Chocolate Watchband.
Personnel: David Aguilar (vocals, harmonica, keyboards, percussion); Gary Andrijasevich (vocals, drums); Michael Reese (guitar).
1. Blues Theme
2. Gone And Passes By
3. Don't Need Your Lovin'
4. Are You Gonna' Be There?
5. It's All Over Now Baby Blue
6. I'm Not Like Everybody Else
7. Sittin' There Standin'
8. She Weaves A Tender Trap
9. Misty Lane
10. Sweet Young Thing
11. Let's Talk About Girls
12. I Just Want To Make Love To You
13. I'm Movin' On
14. An Inspiration Message
http://www.thechocolatewatchband.com/discography.html
I
I
V 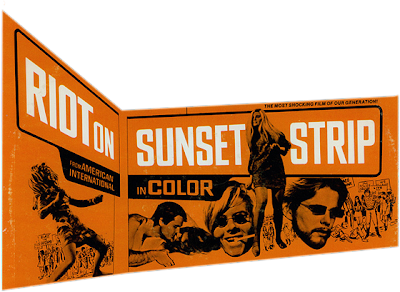 Riot on Sunset Strip is a 1967 low-budget exploitation movie, released by American International Pictures, and filmed and released within six weeks of the actual late-1966 Sunset Strip curfew riots.
The movie starred Aldo Ray, Mimsy Farmer, Michael Evans, Anna Strasberg and Tim Rooney, and featured musical appearances by The Standells and The Chocolate Watch Band.
Along with the attempt to capture the essence of the period around the Sunset Strip riot, a subplot of the movie revolves around a young girl (Farmer)'s troubled relationship with her divorced parents (Ray and Hortense Petra). Her dosage with LSD by a would-be seductor, the subsequent 'acid trip' she experiences, and her later discovery by Ray (a police sergeant) as the victim of gang rape, are among the movie's peak moments.
http://en.wikipedia.org/wiki/Riot_on_Sunset_Strip
Watch Riot On Sunset Strip (1967) Free Online 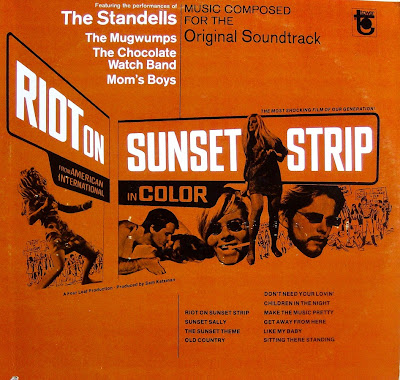