The Chocolate Watchband - Melts In Your Brain...Not On Your Wrist 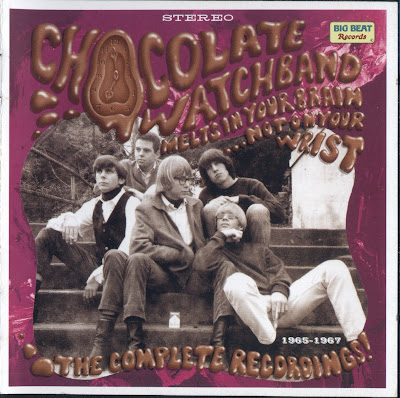 This double-CD set of Chocolate Watchband material is so overpowering that it's difficult to know where to begin. A group that never charted a single (forget an album) across four tumultuous years is suddenly given the box-set treatment in miniature, a double-disc package containing not only every track ever recorded and released by the actual Chocolate Watchband, but also every track ever attributed to them, and also three cuts featuring original Watchband lead singer David Aguilar providing new lead vocals to replace singing that was wiped (or not recorded) at the time. And just to show how screwed-up their history was, the non-Watchband material runs 20 minutes longer than the stuff they actually recorded. (Their one-time manager, Ed Cobb, who seldom seemed to have much good to say about the actual Watchband, is probably watching in total astonishment from whatever celestial plain he alighted upon in death.) And what makes it all even better is that not only is all of this material organized properly for the first time, the real Watchband stuff filling up disc one, but it all sounds incredible -- for the first time, even amid reissues by Rhino and Sundazed, here is a collection of songs that don't sound at least half a generation "off" in quality and source material. Disc two contains everything ever attributed to the group, including the contents of the entire third album, One Step Beyond (which was done by a substitute version of the band). The collection also, at last, identifies the sources of two sets of fake Watchband tracks as the rival West Coast bands the Yo-Yoz and the Inmates, both of which had been involved with Cobb. And even that material is in its best condition ever, and not bad for it, either -- it might not have been the Watchband, but most of this was better than decent music. The only two cuts here that were a mystery going in were the versions of "Medication" and "'Til the End of the Day" on which David Aguilar put on new vocals in 2005 -- and he pulls it off successfully. The 35-year gap is bridged without too much trouble, and if he sounds older, he still sings well. Basically, this set reduces in importance the prior reissues from Sundazed and other labels, and the accompanying annotation provides the most detailed history of the band ever assembled. In essence, it's worth every cent being asked for it, and then some, for fans of garage punk and '60s garage bands, as well as psychedelic enthusiasts. 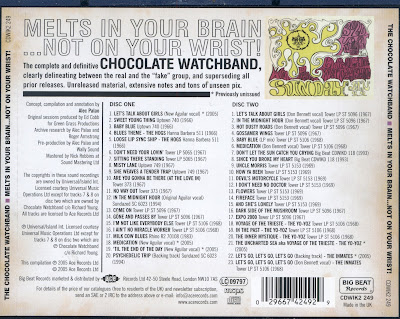