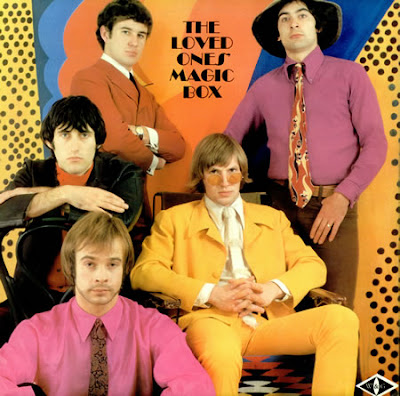 Of all the Australian rock groups of the '60s, there's none that lives on as brightly in the memories of those who saw them or heard them as the Loved Ones. They had "it," that unquantifiable quality that transcends the fashions of the day, that "something" that's more than a great record or two, or frequent memorable live performances that grow larger than reality in people's memories. You can still hear "it" in some of their earliest records, still see "it" on the little video evidence left behind. The Loved Ones were exciting.

When the British group quake hit in the globe in the mid-'60s, most of the new bands inspired to start up started from scratch, made up of musicians who had only just picked up their instruments, more driven by their ambition to do it than their ability to do it. That's where the Loved Ones, like England's Animals or America's Paul Butterfield Blues Band, were different and unique. These were experienced musicians. They came from that time space between '50s rock and '60s rock when youth descended into jazz clubs, listenened to the blues, and watched it spawn folk music. They were already seasoned musicians. When the Rolling Stones came out of the London jazz scene playing their version of the blues, the Melbourne musicians who became the Loved Ones understood not just its excitement value, but how it was done.
The Loved Ones were formed in 1965 by three members of the Red Onions Jazz Band (Gerry Humphries, Ian Clyne, and Kim Lynch) and two members of Wild Cherries (Rob Lovett and Gavin Anderson), a jazz group at that time which later also turned to rock. Singer Gerry Humphries seems to have been the instigator, already an agitator for change and adventure, ruffling feathers inside the Red Onions. A Red Onions session was turned into the first recording by the Loved Ones, a group named after Evelyn Waugh's dark comic book of the day. Their first single carried the same name.
Two things marked that landmark recording: the unique double rhythm, a complex musical achievement made accessible by a clever use of hand clapping, and Gerry Humphries' sometimes bluesy, sometimes soaring voice. "The Loved One" was like nothing anyone had ever heard before, from Australia or from anywhere else in the world. 15 years later, early in their career, INXS would record a faithful copy, and then, seven more years on, at the height of their powers, INXS recorded it AGAIN and still couldn't dare a dramatic overhaul.
The Loved Ones' own version had an immediate impact in Australia. Attracted by the song, audiences found an enigmatic singer with sunken cheeks and outstretched arms as exciting as any singer they'd ever seen or heard before, surrounded by an obviously more than competent band of not just pretty faces, but pretty enough to attract fans of their own. They followed "The Loved One" with "Ever Loving Man," showing off Humphries' voice more than the first single, and another interesting but less complicated arrangement. Third came the compelling "Sad Dark Eyes." As the band careened headlong into the pop stardom tunnel they had never imagined for themselves, their keyboard player did an "Eric Clapton" and jumped off. With him left part of the band's songwriting power.
The Loved Ones' records were released by an independent record company which had made its name as a boutique label recording cover versions of American hits by local Melbourne performers and made a significant contribution recording Melbourne jazz and folk -- hence the Red Onions Jazz Band connection. What W&G Records wasn't ready for, and had never had to deal with before, was a national pop hit... and then a second... and a third. By the time hometown Melbourne was ready for a second hit, the first was only taking off in another part of Australia; and when the third was released, a different area finally had enough stock of the first. The band was sent whirling around the country chasing their hits. In the middle of it all they quickly ducked into the studio and recorded a jazz standard they could play with their eyes closed. The "Blueberry Hill" EP was a hit too. It took a year before the band was able to return to the studio properly to complete enough songs for an album. By then another original member had left, replaced by an American. The dynamics of the band had completely changed. An album, Magic Box, was hobbled around the singles. But the Loved Ones were exhausted and spent and broke up in October 1967, just two years after they were formed with so much promise.
Singer Gerry Humphries rattled around the music scene, tried management, formed the anything-goes fun-and-nonsense Jerry and the Joy Boys, and in 1977, returned to London in an unsuccessful attempt to save a failing marriage, giving up music for the life of a hospital orderly. One suspects there could have been so much more. 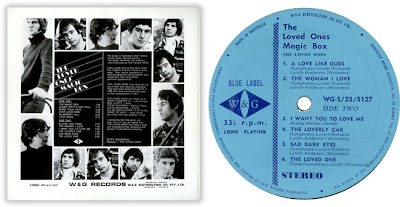 THE LOVED ONES The Loved Ones' Magic Box (Classic and rare original 1967 Australian W&G label 12-track stereo vinyl LP including the hit singles The Loved One, Ever Lovin' Man and Sad Dark Eyes, plus versions of Muddy Waters' I Want You To Love Me and Fats Domino's Blueberry Hill, housed in a front laminated picture sleeve with a great colour cover shot of the band in all their mod finery. The sleeve shows negligible wear and the vinyl looks unplayed - a great copy of this Aussie pop landmark!
1. The Magic Box
2. Shake, Rattle And Roll
3. More Than Love
4. Ever Lovin' Man
5. Blueberry Hill
6. Love Song
7. A Love Like Yours
8. The Woman I Love
9. I Want You To Love Me
10. The Loverly Car
11. Sad Dark Eyes
12. The Loved One
Posted by : D&J at Monday, December 12, 2011