The Master's Apprentices - Hands of Time 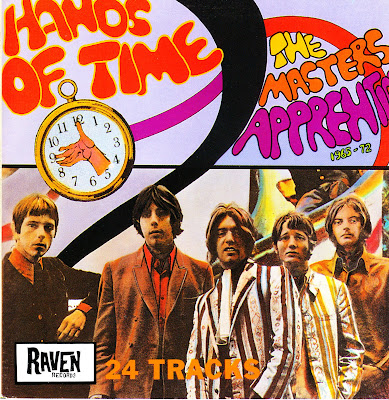 One could easily make the case for designating the Master's Apprentices as the best Australian rock band of the '60s. Featuring singer Jim Keays and songwriter/rhythm guitarist Mick Bower, the band's earliest recordings combined the gritty R&B/rock of Brits like the Pretty Things with the minor-key melodies of the Yardbirds. The compelling "Wars or Hands of Time" and the dreamy psychedelia of "Living in a Child's Dream" were undiscovered classics, although the latter was a Top Ten hit in Australia. Bower left the group after suffering a nervous breakdown in late 1967, and the Masters grew steadily less interesting, moving from flower pop and hard rock to progressive and acoustic sounds. Plagued by instability (undergoing eight personnel changes between 1966 and 1968), the group moved to England in the early '70s, achieving some cult success with progressive rock albums before breaking up in 1972. 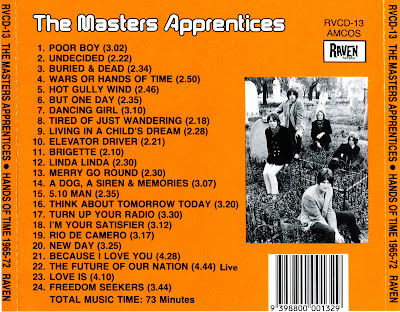 This 24-song compilation covers the group's most popular recordings from 1965-1972. The eight Mick Bower-penned cuts from 1965-1967 are the clear highlights; most of the rest, like much of the Australian rock of the time, is extremely derivative of British progressive rock trends. Includes excellent detailed history by renowned Australian rock archivist Glenn A. Baker.
Posted by : D&J at Saturday, December 10, 2011