VA - The Best Of The Girl Groups 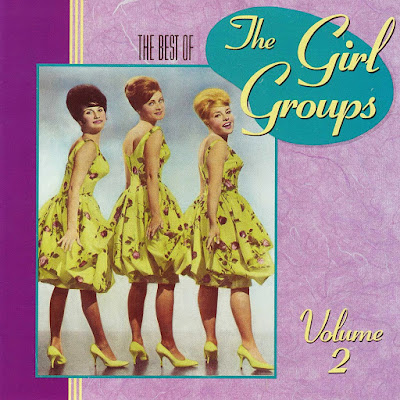 Vol.1-Vol.2
Rhino's Best of the Girl Groups, Vol. 1 collects 18 of the greatest girl group singles, including the Ad Libs' "The Boy From New York City," Betty Everett's "The Shoop Shoop Song (It's In His Kiss)," the Exciters' "He's Got the Power," and Claudine Clark's "Party Lights." The Shangri-Las have no less than three of their singles -- "Leader of the Pack," "Remember (Walking in the Sand)," and "Give Him a Great Big Kiss" -- included here, while two of the Shirelles' finest, "Baby It's You" and "Will You Love Me Tomorrow," and the Chiffons' "He's So Fine" and "One Fine Day" reaffirm why all three acts are among the best girl groups. Most of the style's big hits, such as the Dixie Cups' "Chapel of Love," are featured, but the lesser-known tracks, like the Jaynetts' "Sally, Go Round the Roses," Evie Sands' "I Can't Let Go," and Skeeter Davis' "I Can't Stay Mad at You," keep the collection interesting for more serious fans of girl group pop. A solid, entertaining album, Best of the Girl Groups, Vol. 1 is a must for anyone interested in one of the most distinctive sounds of the '60s. 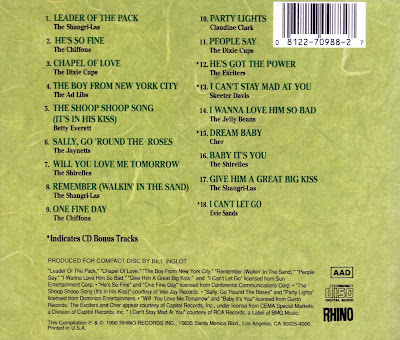 Picking up where the first volume left off, The Best of the Girl Groups, Vol. 2 contains 18 classics from the golden age of girl groups. These are hardly leftovers; if anything, it feels like a greatest-hits collection, thanks to songs such as "My Boyfriend's Back," "Sweet Talkin' Guy," "The Loco-Motion," "A Lover's Concerto," "Chains," "Popsicles and Icicles," "Tell Him," "Don't Say Nothin' Bad (About My Baby)," "Easier Said Than Done," and "Johnny Get Angry." A few of these tunes may sound a little dated, but the startling thing about The Best of the Girl Groups, Vol. 2 is that the majority of the music sounds as fresh and exuberant as it did when it was originally released. Which only reiterates the fact that this isn't just some of the best girl group pop ever made -- it's some of the best pop of any era. 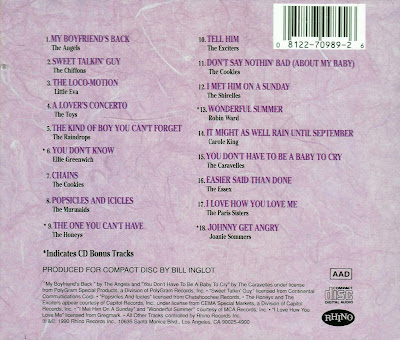