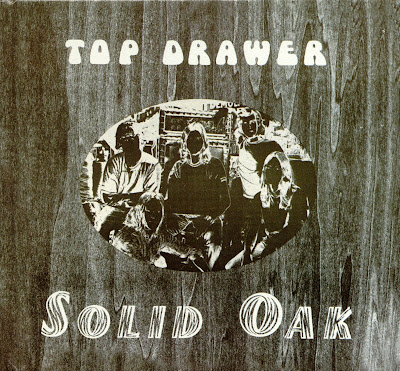 When scanning collector magazines, you'll often come across listings for albums by obscure psychedelic bands such as Top Drawer, commanding ridiculously high prices merely because they're very rare. And in most cases, just because they're very rare doesn't mean you have to pay those prices, or even feel like you're missing much. Top Drawer, a young Kentucky band whose generic bluesy guitar riffing, naively overambitious lyrics, and reliance upon hard rock cliches screamed 1969-1970, made one of those rare  records. Which didn't stop it from getting reissued in the 1980s 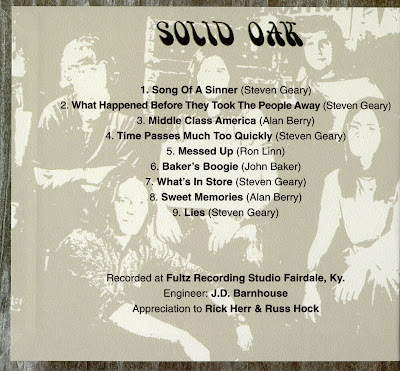 Bringing fans the best of obscure psychedelia, Arkama finally put collectors out of their misery with the reissue of Top Drawer's Solid Oak. It doesn't get much rarer than this: the Kentucky band self-released Oak back in 1969, pressing only a measly 500 records, and hardcore psychedelic aficionados have been searching for copies ever since -- but now it's back in digipack form and boasting the original sleeve's artwork. From the epic opening track, "Song of a Sinner," it's evident why so many were so keen to get their hands on this album. This dreamy, atmospheric track boasts both sublime keyboard work from Ron Linn and stellar lead guitar from John Baker. "Sweet Memories," in contrast, delivers up a more delicate aura, with Linn's harpsichord now to the fore. But Top Drawer were capable of more than just sweeping soundscapes and lilting melodies, as the poppy "Middle Class America," awash in fazed guitars, symphonic organs, and splashy lead guitar, well proves. "Time Passes Much Too Quickly" and "What's in Store" are equally bright and breezy, but flecked with a British beat aura; "Baker's Boogie" delivers precisely that, while the guitarist showcases his best surf styling on "Messed Up" and the entire band struts into freakbeat on "Lies." The musicianship is superb and Baker is a virtuoso, surprisingly preferring a relatively understated approach compared to his more braggadocio guitar god contemporaries, thus leaving plenty of room for the rest of the band to equally impress. This may be a reflection of the group's songwriting, for Baker contributes only his "Boogie" and the bulk of the set is composed by singer Steve Geary or bassist Alan Berry -- in any case, the melodies reign supreme throughout. This superb album has been long sought after, and now everyone can experience its pleasures. ~ Jo-Ann Greene
***
"...Top Drawer is without a doubt one of those bands that has been long forgotten about. If it wasn’t for this wonderful compilation record, I don’t know if I ever would have stumbled upon these guys. This obscure band hailed from the rural center of the United States, coming right out of Kentucky. There aren’t many facts to be said about the band, considering they were around back in 1969-1970 and they only have one album that I am aware of. Their one and only album, titled “Solid Oak”, was recorded back in 1969 at Fultz Recording Studio . According to the record sleeve of the compilation the album was only repressed one time back in 1980 on Akarma Records from Italy, and has never been pressed since. On top of that, none of the band’s original members have ever surfaced to talk about the music, and it’s not looking like they’re about to show up anytime soon. This song was included on the compilation in hopes that the band members would take notice of the praise that their almost-perfect record “Solid Oak” has continually received over the years. Then perhaps the band members can give us their side of the story on what it was like to be twenty-something years old in the middle of America and release a psychedelic masterpiece, and then vanish back into normal life without a trace.."
Posted by : D&J at Monday, January 23, 2012