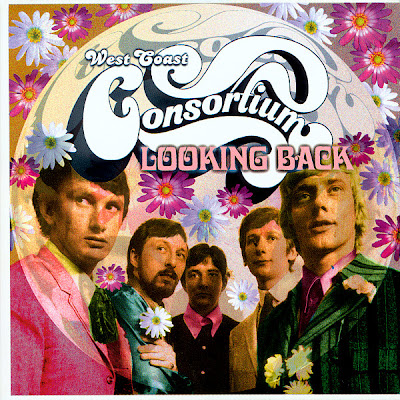 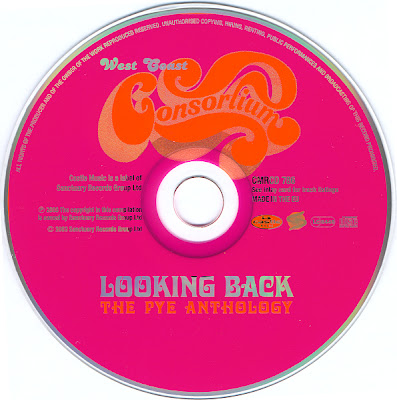 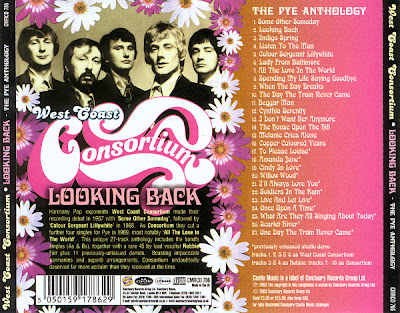 Re-mastered at The Town House.
Tracks 17 to 27 previously unissued studio demo.
West Coast Consortium can be lumped in with bands like the Ivy League, the Bystanders, and the groups that pop up on soft British psychedelic pop collections. They combine lush Beach Boys/Four Seasons vocal harmonies with lush, string-filled backing to create a uniquely English style of '60s pop. Looking Back is a 27-track collection of the band's output for Pye between 1967 and 1970. Actually, only a little more than half of the record was released; the last 11 tracks are demos. And to make things confusing, the band had several different names. One single was released under the name Robbie (after the lead singer Robbie Fair), two singles were released as West Coast Consortium, and the rest were released as Consortium. They finally settled on Consortium because their one semi-hit, the incredible rich and Baroque almost to the point of a joke "All the Love in the World," came under that name. The rest of their songs never came close to breaking but they had quite a few goodies hidden away, like "Indigo Spring," the pounding "The Day the Train Never Came," the bubblegum soul-sounding "I Don't Want Her Anymore," and the pastoral "Copper Coloured Years." The demos, unlike many that are tacked onto sets like this, actually measure up quite well against the officially released tracks. The studio sheen that is sacrificed is made up by the energy that band brings to the tracks. Best of the lot are the tough "Willow Wood," the Kink-y "Live and Let Live," and the funky "What Are They Singing About Today." It's a shame the band didn't get a chance to take these songs into a studio and polish them up, but it's nice that they are here for fans of British psych-pop to enjoy. The whole set is quite enjoyable and serves to firmly install Consortium at the summit of the style.
http://www.cduniverse.com/productinfo.asp?pid=6390003
http://www.allmusic.com/album/looking-back-the-pye-anthology-r662903
Posted by : D&J at Wednesday, January 18, 2012