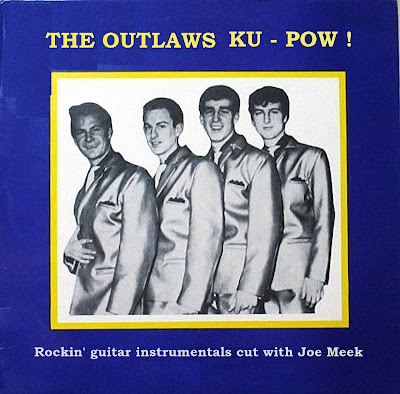 The Outlaws' story begins in London in 1960, with Billy Grey and the Stormers. The group's line-up comprised Billy Grey (vocals), Billy Kuy (lead guitar), Reg Hawkins (rhythm guitar), Chas Hodges (bass) and Bobby Graham (drums). The group played the usual round of youth clubs, dance halls and holiday camps. In the autumn of 1960 Billy Grey left the group to get married. The remaining four members auditioned for Joe Meek, who was searching for a backing group for his new discovery Mike Berry. Meek was so delighted with the group's performance that they became his in house session band, backing not only Mike Berry, but all manner of Meek proteges : John Leyton, Heinz, Glenda Collins, Freddie Starr and numerous others. Meek re-named the band The Outlaws to tie in with a Wild West image that he was keen to bestow upon them.
Their first single, "Swingin' Low", a rocked-up rendition of the traditional "Swing Low Sweet Chariot", was released in March 1961, on HMV POP 844. I clearly remember first hearing the record on Radio Luxembourg on a Monday evening. Generally I'm more into sax / piano instrumentals, but this fresh guitar sound made quite an impression on me. With a peak position of # 46 on the UK charts, this was an encouraging start. The next single, "Ambush", was overdubbed with sound effects (gunshots, horses whinnying), and did only slightly better at # 43. Nobody could guess then that it would be the Outlaws' last chart entry. "Ambush" and its flip, "Indian Brave" also appeared on the Outlaws' first and only LP, "Dream of the West", (late 1961), which qualifies as an early concept album. Meek wrote all twelve tracks (under his songwriting pseudonym, Robert Duke), as well as writing the sleeve notes. It seems that the Outlaws received no money or royalties for the project, being paid mainly with fish and chips suppers! The next single had "Valley of the Sioux" on the A-side, but it was the other side, "Crazy Drums" (a sort of Sandy Nelson meets Mickey Baker) that showed Joe Meek at his most innovative. Such was his technical wizardry with the basic track that the group members hardly recognized their original contributions.
Soon only Chas Hodges was left of the original quartet, as the other three members quit for various reasons. Drummer Bobby Graham went on to become the most recorded British session percussionist in the 1960s: http://bobbygraham.co.uk/bobbygraham/career.htm
Kuy was replaced by Roger Mingay, Hawkins by Ken Lundgren and Graham by Don Groom. This line-up plays on their fourth (and best, IMHO) single, "Ku-Pow!"/"Last Stage West", released in February 1962. "Ku-Pow!" was clearly inspired by Duane Eddy's "Shazam!", but for me this does not detract from its greatness. After this, "Sioux Serenade"/"Fort Knox" was a slight disappointment, melodic though both sides were. With its overdubbed strings and pizzicatos, it could have been a John Barry record. However, all this changed with the arrival of Ritchie Blackmore (lead guitar) and Mick Underwood (drums) in October 1962, both from Screaming Lord Sutch's Savages. This line-up lasted until April 1964 and recorded the last four 45s by the Outlaws, among which a few vocal numbers : "That Set the Wild West Free", and their final single, "Keep-a Knockin'"/"Shake With Me", featuring proto-heavy metal guitar work by Ritchie Blackmore, unheard of in 1964. In the summer of 1963, The Outlaws had the privilege of backing two giants of rock 'n' roll, Gene Vincent and Jerry Lee Lewis. Vincent was so impressed that he hired them to back him again in September of the same year. The group also made one film appearance, in the above-average jukebox drama "Live It Up" (1963).
After the departure of Blackmore in April 1964, the group struggled on until mid-1965, before disbanding. The time for instrumental groups of that type (apart from the ever-popular Shadows) had clearly passed, two years into the Merseybeat boom.
http://www.rockabilly.nl/references/messages/outlaws.htm
http://forgottenbands.blogspot.com/2010/10/mike-berry-outlaws.html
http://en.wikipedia.org/wiki/The_Outlaws_(UK_band)
http://www.instrumentalreview.com/instreviewoutlaws.html
http://www.bandtoband.com/band/the-outlaws/ku-pow
The Outlaws - Ku-Pow !
Outlaws - Ku-Pow (33 / 77:46)