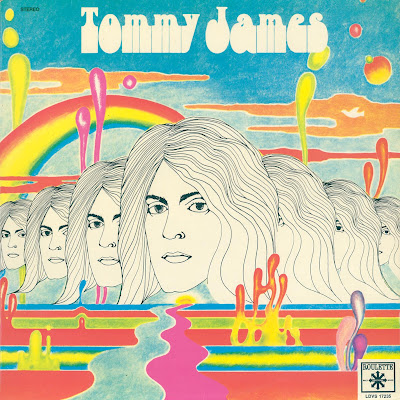 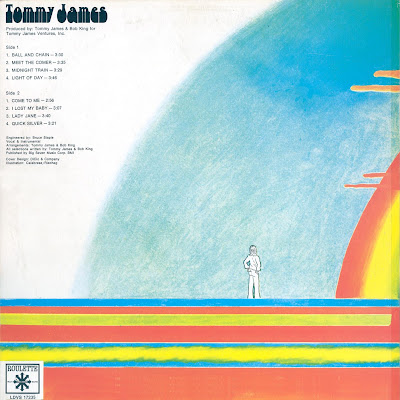 "It was a bit strange and a little scary making music without the Shondells... but it gave me a chance to experiment with a lot of new sounds and ideas". - TJ
"Neon", a group Tommy was producing for Paramount Records, became his new studio and touring band. Their hard, gutsy style was perfect for Tommy's new musical persona which now relied more heavily on rhythm and a grittier guitar sound.
From this album, Tommy scored his first two chart hits as a solo artist, "Ball and Chain" and "Come to Me"
A very cosmic/psychedelic album cover has seven black-and-white Tommy James heads coasting over what looks like an acid trip, rainbow behind him, colors dripping upwards. It's the opposite of the black-and-white psychedelic look of the Cellophane Symphony album and the first of James' three final albums for Roulette. If we are to take the discs as three chapters, this one is Tommy James and Bob King proving that Tommy James was the Shondells. "Ball and Chain" is poppy and intense, the Velvet Underground gone bubblegum. Clearly, drugs had some influence on Tommy James' work, and where his ex-bandmates took a stab at the third Velvet Underground album with their Hog Heaven track "Come Away," "Ball and Chain" from the first Tommy James solo album sounds like it is an outtake from the Velvet Underground's Loaded CD. "Meet the Comer" has bits of Neil Young's "Helpless," all gone pop, of course. Tommy James' reformulation of pop riffs he would create or nick kept the majority of his albums highly listenable. It's a real gift to tune in and grab melodies from the cosmos, and rest assured, memorable hooks and special sounds are all over these grooves. "Midnight Train" continues the party, making this a very underground pop album. No hit single emerged until Bob King and James put the Christian of the World album together. That effort was certainly more commercial and refined, but this Tommy James solo debut has merit, integrity, and inspired insanity. "Come to Me" leads off side two, and it is the lost sequel to "Sugar on Sunday," the big hit for the Clique which first appeared on the Crimson & Clover album. "Come to Me" has a choir of backing vocals and should've been a smash with its flavors of past glories enhanced with a new bridge. Wonderful stuff. As the first part in his solo trilogy, Tommy James pays tribute to Tommy Roe, Billy Joe Royal, and even Bobby Sherman, but shows them all how a pop album is crafted and how Tommy James is the genuine article. It's perhaps the most experimental of all his projects, more cohesive than Peter Lucia and Mike Vale's Hog Heaven, and sets the stage for the refined Christian of the World and the reverent and very satisfying Nashville recording My Head, My Bed and My Red Guitar. Where a song like "Quick Silver would be out of place on those aforementioned titles, it fits perfectly on this descent into a pop maestro's psyche. An enlightening project, and like many of Tommy James' other artistic endeavors, tragically overlooked..
Posted by : D&J at Saturday, September 29, 2012