The Essential Pebbles Collection, Vol. 1 is a budget-priced, two-CD set that serves two functions. The first, fulfilled by disc one, is to distill the first ten volumes of the Pebbles '60s garage rock singles compilation series. The second is a bonus disc full of even more insanely rare material that has never appeared on Pebbles albums or myriad other '60s compilations. Considering the staggering amount of material reissued by Archive International, in addition to myriad '60s compilations released by other companies worldwide, casual observers of this phenomenon might wonder what the fuss is all about. The singles compiled by these releases are from an era where local bands' records shared airplay with the major hitmakers. The Pebbles series' most important accomplishment has been to provide a glimpse of the musical life beyond the hits in constant rotation on many oldies radio stations.
Pebbles compiles the best independent-label '60s singles that weren't national hits, but their local reputations have insured that the records trade for high prices on the collectors' markets. Lack of significant sales outside of its geographical region doesn't mean that the records lack polish; tracks like the Motifs' "Someday" demonstrate a mix of Motown and Atlantic soul influences with some of the harder-edged British Invasion group sounds, while the bands from Chicago have a bluesy sound but incorporate other influences as well, like the jagged Zombies-esque organ solo on the Omens' "Searching." There was even a Pebbles volume called Ear-Piercing Punk, showcasing the hardest-rocking songs, packaged to appeal to fans of the then-current wave of late-'70s punk. With this look back at its legacy, The Essential Pebbles Collection, Vol. 1 looks backward and forward at the same time, providing listeners with something old and new -- the true essence of garage rock compilations. 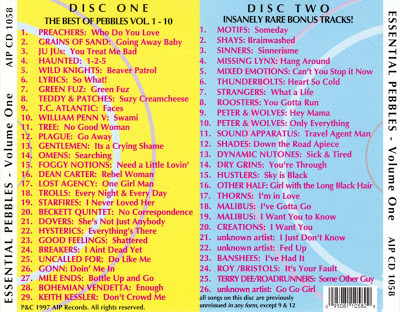