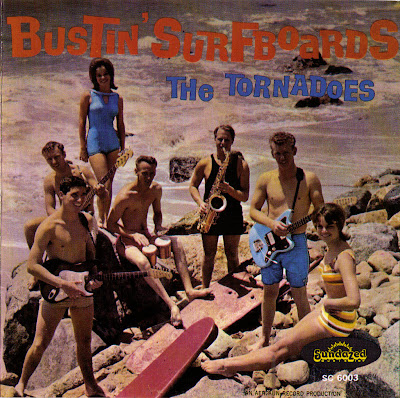 Not to be confused with the British studio group that gave the world the Joe Meek-produced instrumental "Telstar," or the Midwest group that recorded "Scalping Party" on Cuca, or the Kennewick, Washington combo of the same name, this group of Tornadoes burst onto the national scene with one of the very first surf instrumentals, "Bustin' Surfboards," in 1962. A family band, the Tornadoes' lineup consisted of two brothers (Gerald and Norman Sanders), their cousin Jesse Sanders, and a friend, Leonard Delaney. They started out as an instrumental group from San Bernardino, California called the Vaqueros. After adding sax man George White to the lineup, they changed their name to the Tornadoes. Their lone national chart entry was nonetheless an important one, with "Bustin' Surfboards" in 1962 making the playlists in cities that were far removed from any kind of surfing activity and signaling the beginnings of surf music as a national craze. Although using an off-brand echo unit in place of the Fender reverb unit (which hadn't been invented yet), the record had the prerequisite sound of this fledgling genre, utilizing a solid surfer's stomp drumbeat and crashing wave sound effects throughout.
More recordings followed, with a name change to the Hollywood Tornadoes for their next two singles in deference to their British namesakes, who had charted higher with "Telstar." Their fourth single, "Shootin' Beavers," was banned from radio play because of the so-called suggestive title. No more hits were forthcoming, although they did release one excellent album that stands as one of the earliest -- and best -- examples of the genre. And when Quentin Tarantino featured "Bustin' Surfboards" in his 1994 film Pulp Fiction, the bandmembers subsequently reunited -- minus saxophonist George White -- to release Bustin' Surfboards '98 three and a half decades after their original hit. 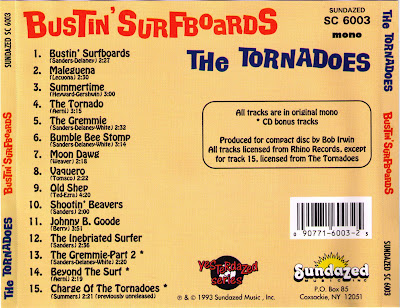 The Tornadoes' biggest hit became the title track of this, their only album, which also includes acknowledged surf classics like "Shootin' Beavers" and "The Gremmie." The inclusion of three bonus tracks (including the previously unreleased "Charge of the Tornadoes") make this a must-own for fans of the surfin' sound